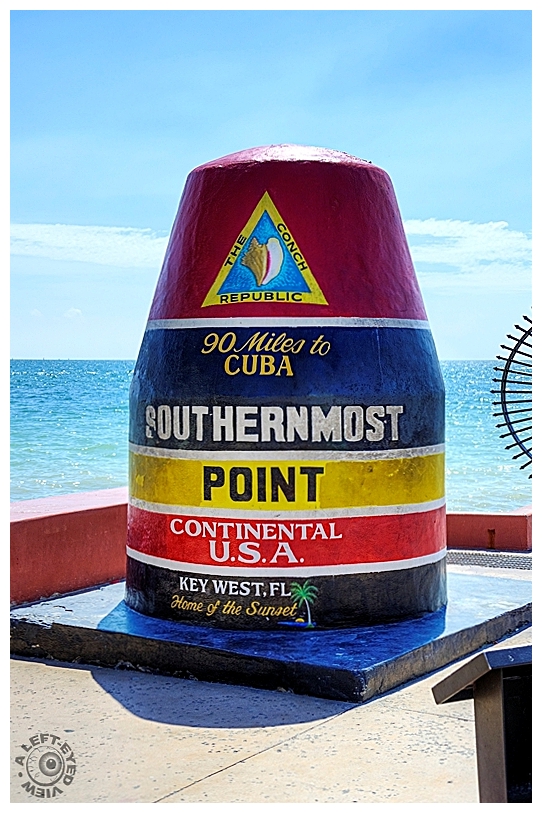 Posted by Steven (Chicagoland, United States) on 24 October 2013 in Documentary & Street and Portfolio.

The Southernmost point was originally just marked with a sign, which was often stolen. In response to this, the city of Key West erected the now famous concrete buoy in 1983. The concrete buoy is actually an old sewer junction that was dug up in the area and found too heavy and large to move, so it was painted up to look like a buoy. Today it is one of the most visited and photographed attractions in Key West.

ha ha . . fascinating dialog here and I can well-imagine the debate.

Super shot of this distinctive landmark - and another great story in this series as well.

"appearances are deceiving" comes to mind after reading your info text ... nevertheless, it's an attractive "monument" and a remarkable place, "continental" or not ... ;-)

Great shot, Steven, and I think I can safely say it's at least a jump-off spot for a 90-mile swim! ;D

Ah! Why let the truth get in the way if a good story!?

Superb capture of the point !

Ha ha. The may think of themselves living in a small continent while the rest of the US is in a big island. Excellent capture and very interesting description.

Interesting history! Lovely capture - the light and clarity are lovely

Interesting information! They certainly painted it nicely. Wonderful ocean in the background!

Been there a few times, "continental" or not.

At first glance I thought it was some sort of beverage :-))) Great shot of this interesting "landmark" !!! The colors and light are fabulous ...

fine image. for lots of people coming the other way, it has been a symbol of freedom