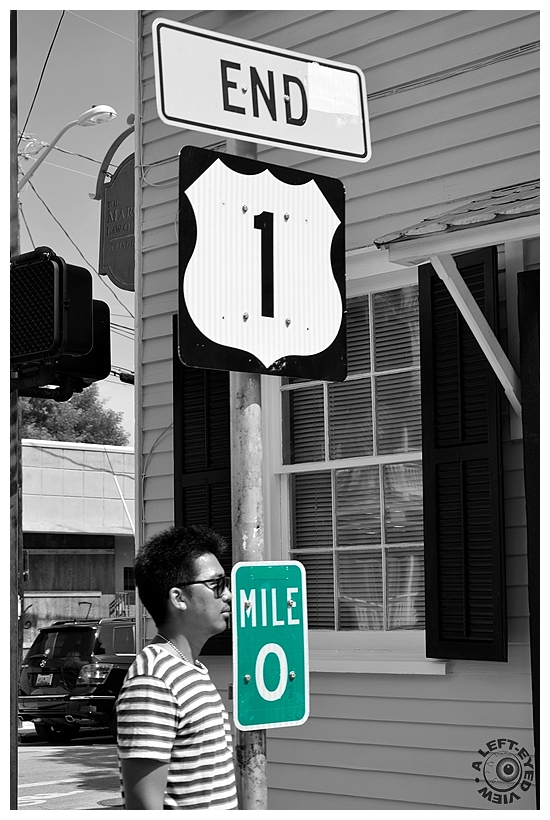 End of US Route 1

Posted by Steven (Chicagoland, United States) on 4 November 2013 in Documentary & Street and Portfolio.

The official mile marker indicating the end of US Route 1 in Key West, Florida.

U.S. Route 1 is a major north - south U.S. Highway that serves the East Coast of the United States. It runs 2,369 miles, from Fort Kent, Maine, at the Canadian border, south to Key West, Florida. U.S. Route 1 is generally paralleled by Interstate 95, though the former is significantly farther west (inland) between Jacksonville, Florida, and Petersburg, Virginia. The highway connects most of the major cities of the east coast, including Miami, Washington, D.C., Philadelphia, New York City, and Boston, passing from the Southeastern United States to New England.

It was interesting to see how many people lined up to get their photo taken by it.

Nice choice for the selective colouring Steve, strange how such a non descript sign should become an iconic photo landmark.

A splendid capture with excellent use of selective colouring. A very famous route indeed !

Great street shot and an excellent use of selective color, Steven. I had no idea that Route 1 was so famous.

An icon for sure. Nice processing!

so cool shot
green in this image is so creative

Wow, what an awesome spot to be and to photograph! Love this!

A neat curiosity. And a fine B&W rendition but keeping the sign colored for a stronger focal point.

Great selective coloring, Steve!
In CT US 1 ran through our town at the shoreline. We've driven it in Maine (where it is a highway), and in so many of the other eastern states it is a key road in many small towns and villages as well as the cities you mentioned.

I agree with Curly, nice choice of selective coloring. That green speaks volumes.

Wonderful use of selective color! I wold love to travel all of highway 1 someday!

It's fantastic !! A fine composition !!