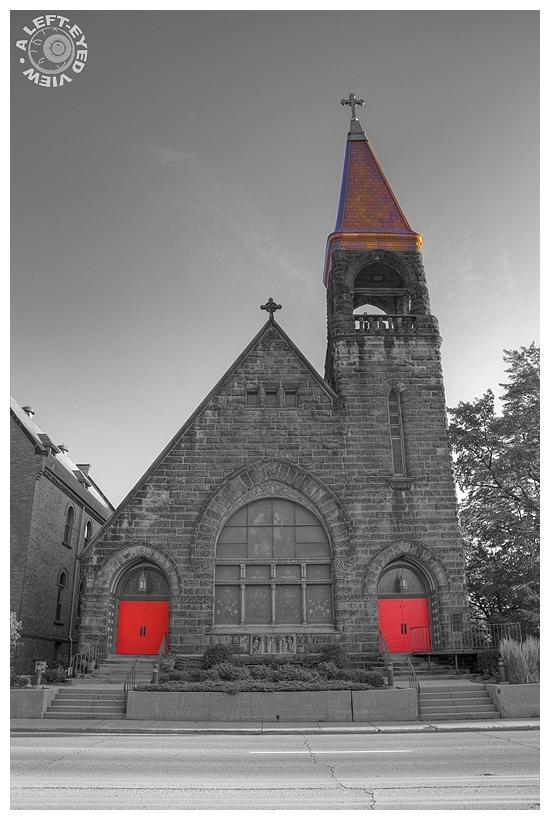 Posted by Steven (Chicagoland, United States) on 14 November 2013 in Architecture and Portfolio.

Christ Episcopal Church, built in 1888, is Richardsonian Romanesque architecture with Gothic features - pointed arches over the doorways, large front window and openings in the bell tower. The bell tower rises 120 feet and houses one eighteen-hundred pound bell cast in Troy, New York. The church was designed by the Chicago architectural firm of Edbrook and Burnham. It was completed at a total cost of $33,741.67 through special gifts and memorials. Beautiful stained glass memorial windows adorn each side of the church. The large front window, known as the baptismal window, depicts Christ and the children. The pews are oak with cherry trim. The church's exterior is Carbondale brownstone.

Christ Episcopal Church also has a beautiful chapel attached to the main church, The Chapel of Our Lady, which has been described as a Gothic gem. The chapel was completed in 1914. The 28-foot by 63-foot chapel seats 60 and was designed by architect Harry Mace of Evanston. The golden oak altar was carved by John Lang, son of the famed wood carver of Oberammergau, Germany, Alois Lang. The stained glass triptych window behind the altar was imported from England. The chapel is considered to be one of the best examples of perpendicular Gothic design in the northern Chicago metropolitan area.

Fascinating image with the selective colour and magnificent gothic features.

If you'd left the doors in mono we might have had a Duracell church :-)

Wonderful shot of a magnificent church with a long histroy. I like a beautiful facade and want to actually see beautiful stained glass by all means. Have a nice day. :)

Original selective desaturation. I like the copper tone of bell tower.
An interesting place to visit (when I return to Chicago, ha ha)

What a beautiful old church - I love that copper steeple. Well done!

Wow. What a grand church. I love your processing with the great red doors and the copper steeple!

brilliant presentation ... not only the selective colouring, but also the clever and effective angle !!!

Beautiful architecture - I love your used of selective color and this point of view.

A very interesting architectural mix ... the details are wonderful !!! Beautiful image, excellent use of selective color ...

The work with the selective coloring has produced an excellent visual effect. It has an almost human appearance.

An impressive image of this church. Cool selective color.

What a beautiful old church. I love the architecture. Wonderful use of selective color!

Nice use of selective color. Though the black and white might benefit from a bit more contrast.

Love this! The selective color makes it a more evocative photo than all color or monochrome.