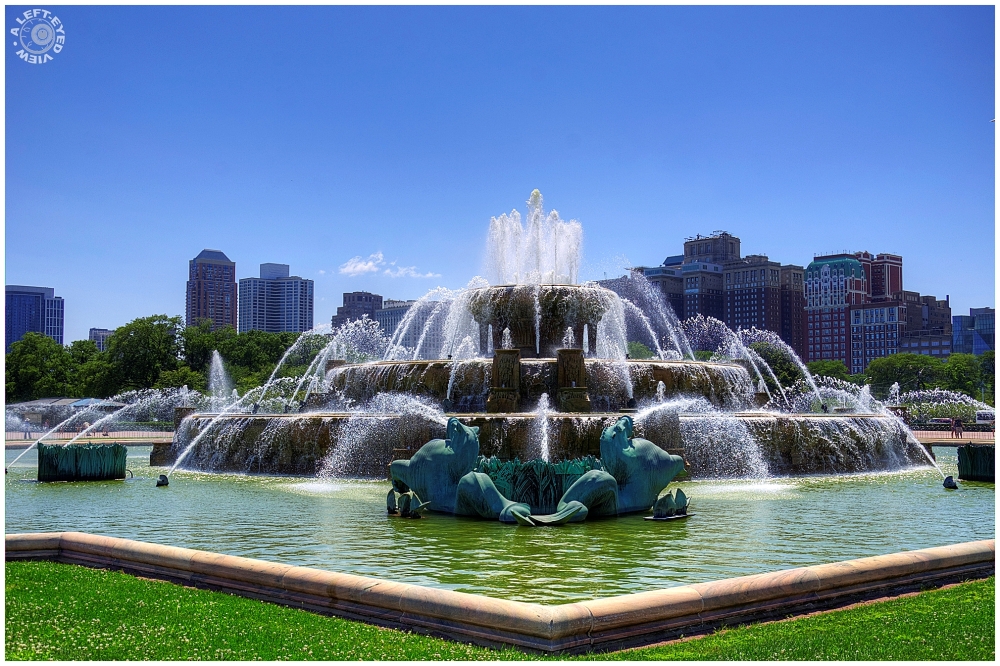 Posted by Steven (Chicagoland, United States) on 15 November 2013 in Cityscape & Urban and Portfolio.

The fountain is considered to be Chicago's front door, since it resides in Grant Park, the city's front yard. The fountain, located at Columbus Drive and Congress Parkway, was designed with sculptures by Jacques Lambert. It was donated to the city by Kate Buckingham in memory of her brother, Clarence Buckingham. The fountain itself represents Lake Michigan, while each sea horse symbolizes a state bordering the lake. The statues were created by the French sculptor Marcel F. Loyau. The design of the fountain was based on the Bassin de Latome and modeled after Latona Fountain at Versailles.

The fountain runs from 8:00 AM to 11:00 PM every day from mid-April to mid-October. During a water display that runs for 20 minutes every hour on the hour, the center jet shoots up vertically to 150 feet. At dusk, a light and music show coincides with the water display. The last show of the night begins at 10:00 PM.

Buckingham Fountain was dedicated on August 26, 1927.

Wonderful shot of a fountain with nice-design. The beauty stand out against the blue sky and the skyline. I'd like to see a water display. Excellent composition and beautiful colors. Have a great weekend. :)

Magnifique, I don't know how you did it, but the ratio of lighting here seems
monumental, 5*****'s, five stars !!~

I would definitely love to go to Chigago, as I suspect an architectural spot there ! Great shot Steven !

A beautiful capture with marvelous light and colour combinations ! Excellent framing ! Must truly be a very beautiful fountain to see with all the water .
Wishing you a good weekend.

Magnificent achievment in art and design. Superb composition as well showing the fountain and grand backdrop of the city skyline.

Fabulous colors and composition here, Steven - love the fountain against the skyline in the background.

Sure is a beauty, and your photo is very fine. I love the sunlight and appreciate your informative text.

Beautiful composition and treatment! Love the colours as well!

Gorgeous point of view - the light is also lovely

A very beautiful image of this quintessential Chicagoan. The framing and the intense light are excellent.

A superb look at this fountain Steven, with a nice city view.

Beautiful perspective with the city behind the fountain. This fountain is just beautiful! I just love all the sprays of water! Gorgeous light and color. I really liked the information.

What a wonderful fountain! I like how you've shown it in its sun drenched glory. Excellent photography.

Fine shot of this Chicago landmark.

That is a beautiful landmark. What a great fountain.

I just love this fountain, anytime we head up there, the fountain's a destination :-) I never knew that was the name though so thanks for sharing!

Lovely shot and such a well considered composition.

Wow … gorgeous capture! An amazing setting for a fountain!

A beautiful shot Steven, the framing is excellent !! Wonderful with the perfect blue sky and big skyline !!

Stunning image, beautifully composed and with wonderful colors and light !!! The fountain is absolutely magnificent and the city skyline makes a fabulous backdrop to it ...

impressive data to accompany an impressive image! i love the vivid colours, the clarity and above all how you composed the picture, with that angle of the basin jutting towards the viewer ...