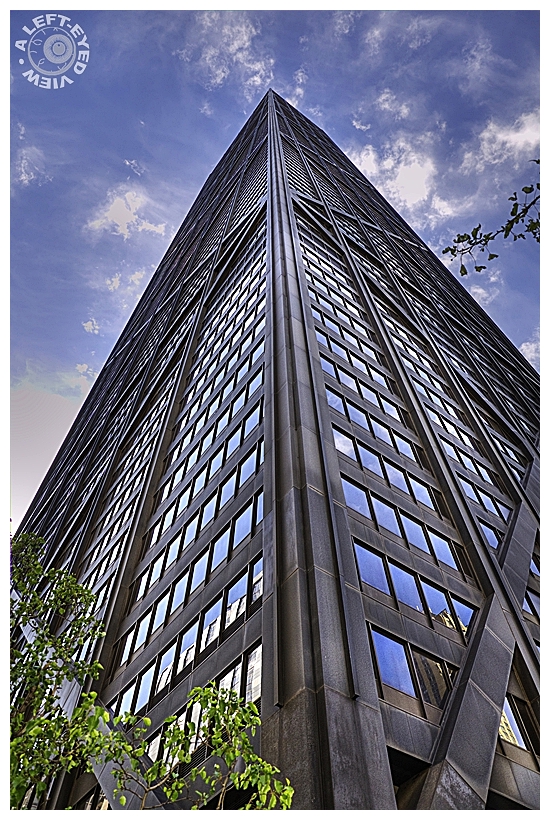 Posted by Steven (Chicagoland, United States) on 18 November 2013 in Architecture and Portfolio.

The John Hancock Center, at 875 North Michigan Avenue in the Streeterville area of Chicago, Illinois, United States, is a 100-story, 1,127-foot tall skyscraper, constructed under the supervision of Skidmore, Owings and Merrill, with chief designer Bruce Graham and structural engineer Fazlur Khan. When the building topped out on May 6, 1968, it was the tallest building in the world outside New York City. It is currently the fourth-tallest building in Chicago and the seventh-tallest in the United States, after One World Trade Center, the Willis Tower, the Empire State Building, the Bank of America Tower, the Trump Tower Chicago, and the Aon Center. When measured to the top of its antenna masts, it stands at 1,506 feet. The building is home to offices and restaurants, as well as about 700 condominiums, and contains the third highest residence (above adjacent ground level) in the world, after the Trump Tower (also in Chicago), and the Burj Khalifa (in Dubai). The building was named for John Hancock Mutual Life Insurance Company, a developer and original tenant of the building, and has the nickname "Big John".

The 95th floor has long been home to a restaurant, the latest tenant being "The Signature Room on the 95th Floor". Diners can look out at Chicago and Lake Michigan. The Observatory attraction (called "John Hancock Observatory") competes with the Willis Tower's Skydeck across town. John Hancock Center is in the heart of Michigan Avenue, a prime tourist hotspot in Chicago, while the Willis Tower is in the financial district. John Hancock Observatory allows a 360° view of the city, up to four states, and a distance of over 80 miles. The Observatory has Chicago's only open-air SkyWalk and also features a free multimedia tour in six languages, narrated by actor David Schwimmer. From January to March the Observatory offers what is claimed as the world's highest ice skating rink, using a synthetic surface that enables the use of standard ice skates at normal room temperature. The 44th-floor sky lobby features America's highest indoor swimming pool.

Fantastic angle and perspective for the shot, it seems to go on for ever!

This is a cool shot of a great building. Great perspective and excellent POV. I'd like to visit Chicage and see a panoramic view from John Hancock Observatory someday. Have a great week. :)

Excellent capture with a fantastic perspective to the shot ! It is indeed a very tall building and the view at the top must be wonderful to see !
Wishing you a great day.

Very excellent shot. A great capture of a great building !

Superb angle and interesting information. There is a timeless quality to the architecture of this landmark building.

Superb perspective and composition, Steven - I just love how the tower rises up through the frame, and those clouds are fabulous. Well done!

This is superb Steven. The angle and color are just perfect. 5*

Superb point of view and treatment

superb angle and perspective and once again, impressive data !!!

Impressive and captivating image of the skyscraper. The effect caused by the perspective blends wonderfully with the gorgeous colors. Fantastic work.

One of my favourite skyscrapers in your city's fine collection of many, and a superb corner view composition !

Fantastic perspective! It really shows how tall the building is. I think I would have gotten dizzy trying to capture this image! The sky is beautiful. A very interesting narrative.

I like this crisply detailed shot with the neck-craning perspective. The touches of greenery add relief to the rigid lines of the building.

I am getting dizzy from looking up. Very nice shot.

Marvelous perspective Steven. I love it!

wow That is a fantastic composition - wonderful camera work !! The lines are so superb, and the reflections in the windows add very well !! Stunning !!!

A superb perspective on this beautiful building. Very cool!

The photo is wonderful, Steven ... and the details you've shared add so much!

Love this! Great texture and definition, and one of my favorite PoV's of buildings!