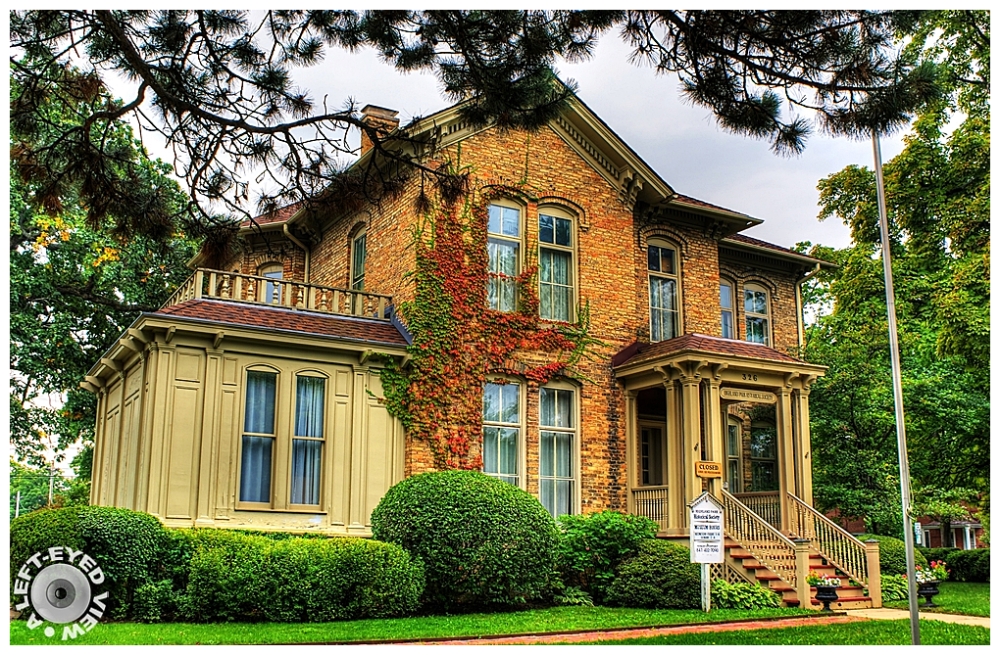 Posted by Steven (Chicagoland, United States) on 4 February 2014 in Lifestyle & Culture and Portfolio.

Back to my series, "What's old is new again!" (tag: woina) Here is a re-processing of the image posted on December 8, 2009. After I discovered the Highland Park Historical Society was using this photo on the main page of their website (without my permission), I decided it needed a lot of correction as it was too over-processed for my taste in HDR. The things I learn years later. :-) You can see how the image was cropped on their website which eliminated my watermark in the lower left corner. :-)

This Victorian Italianate house museum is just 3 blocks from Lake Michigan in historic downtown Highland Park. The house was built by the Highland Park Building company in 1871, and was donated to the Historical Society by Jean Butz James in 1969, the centennial anniversary of the incorporation of Highland Park.

There are eight museum rooms open to the public. The parlor, bathroom, and kitchen have been restored to their turn-of-century charm.

The Parlor retains its original woodwork with ornate crown moldings, and is furnished with Victorian marble-top table, velvet settees and chairs, and an antique pump organ. The Kitchen has a wood-burning iron stove, oak icebox, water pump, and several old utensils. The Highland Park Room contains a 150-year timeline of the development of Highland Park, as well as maps, photographs, and mementos that provide insights into the architecture, residents, and businesses of the past.

The two first-floor Exhibit Rooms (formerly the Dining Room and Garden Room) have exhibits that change every six month to a year. The upstairs Children’s Room contains vintage school desks, books, the dollhouse featured in Elizabeth Orton Jones’ book Big Susan, and many dolls and other toys of the past.

The Costume Room has an antique sewing machine and dressmaker forms, as well as several elegant dresses, coats and accessories from 1880’s to early 1900’s.

Not good to discover they had cropped your watermark out! The textures and warmth of the image are much improved here. I hope they update the website image - with a prominent acknowledgement to you.

The textures and warmth of the image are great. Have a nice day.

That was rude of them. At least they know a good picture, this rendition is so
much better, beautiful !~

Congratulations on the flattery of having your image stolen. I definitely find the new version to be processed more naturally which is more pleasing to my eye. I hope that you contact the Highland Park Historical Society and have them give credit for your work if you allow them to use it on their website.

I like both versions. Each has a different place. I hope you let them know it was your image!
My father was born in Highland PArk, IL.

@Ruthiebear: A great community to be born in! It's a city that has a lot of history and beauty!

They are clever thieves. I like this version much better. It will probably be on their site before you know it.

Gorgeous architecture with a lot of character; great frame!

That must certainly been a surprise to find your picture on their website. And to crop out the watermark. That is a little disarming. I hope that they give you credit. This is a gorgeous image. It sounds like a wonderful place to visit.

Nice use of the branches to frame the historic structure.

What a beautiful building ... thanks for the information you shared.

Maybe give them a call and ask them to change to the new version.

A beautiful structure, so wonderfully captured Steven !! I love the camera angle and superb frame !! The information is very interesting !!

Great capture of the elegant architecture. Nice framing and colors. Have a nice day. :)

The rendering of the house is terrific. Thanks for the info. I hope you will be credited for the web's image.

A nice HDR image without over doing.

looks like my kind of place ... especially if presented as nicely as this !!!