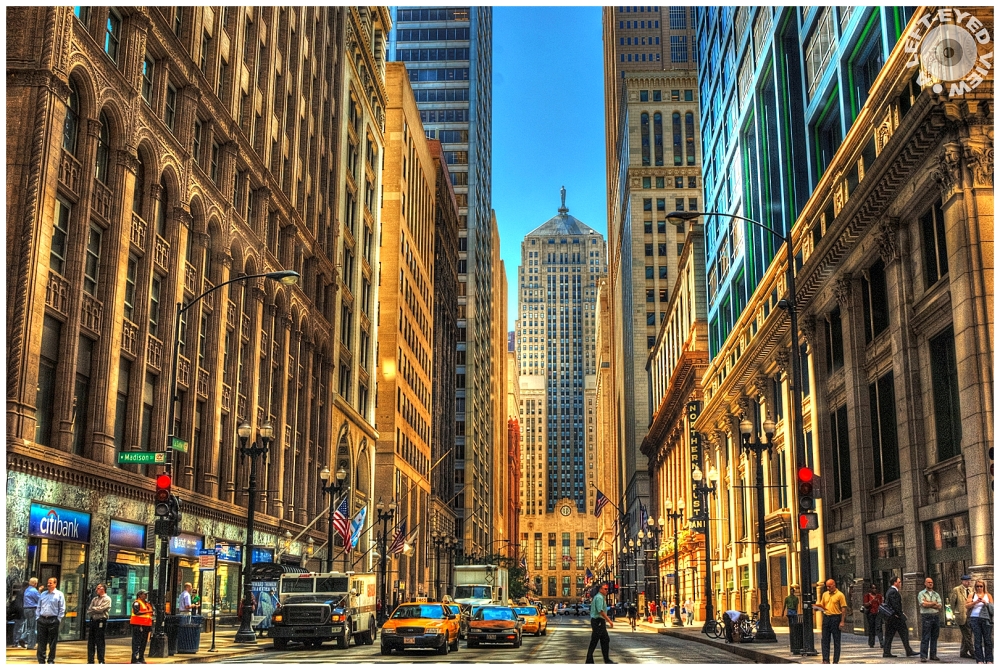 Posted by Steven (Chicagoland, United States) on 8 April 2014 in Architecture and Portfolio.

Another edition of "What's Old is New Again!" (tag: woina) This is a repost of a photo from September 13, 2010. Originally, there was just a little too much HDR processing that was involved with that processing. And in today's processing, I tried to be a little more conservative, while at the same time trying to bring out some of the building details from out of the shadows of the canyon.

LaSalle Street was coined 'The Canyon' due to the tall, steep buildings that lie on both ends of the relatively narrow street. The buildings along the canyon have their faces inward to emphasize the feeling of a canyon. The canyon is in the form of a box canyon and uses the Chicago Board of Trade Building to form an abrupt end. The view from the Chicago Board of Trade Building emphasizes its likeness to a canyon. It is generally not permitted to put signs, banners or other infrastructure that hangs into the canyon.

A great golden processing, suits so well to the subject ! Good work !

I like this, but also your original effort. Bringing out texture and detail with HDR makes your image art.

Great processing that makes it look like a cover of a sci-fi magazine from the 50's or 60's, love it!

This is a fine shot of this unusual place. I liked the explanation of the canyon's features and limitations.
Fine reprocessing.

Nice treatment even if we have different interpretations of 'conservative'!' Impressive view and we'll worth your revisit.

Fabulous image! Wonderful perspective! I really like this one compared to the previous!

The HDR might be a trifle too much but it is a terrific composition.

Well, in 2010 you were already doing your HDR reasonably naturally. Your new version is actually a bit brighter and more colorful, but the restraint seems to come in the more natural edges.

I'm not a big fan of HDR, but this is a great example of bringing out detail that might not otherwise be visible.

A fascinating account of the canyon. Your reprocessing looks very good. I like the detail and excellent relief of your shot.

I like this one a bit more! The canyon! What a proper name for this district :) nice capture!

This is fantastic, beautiful colors and capture!!