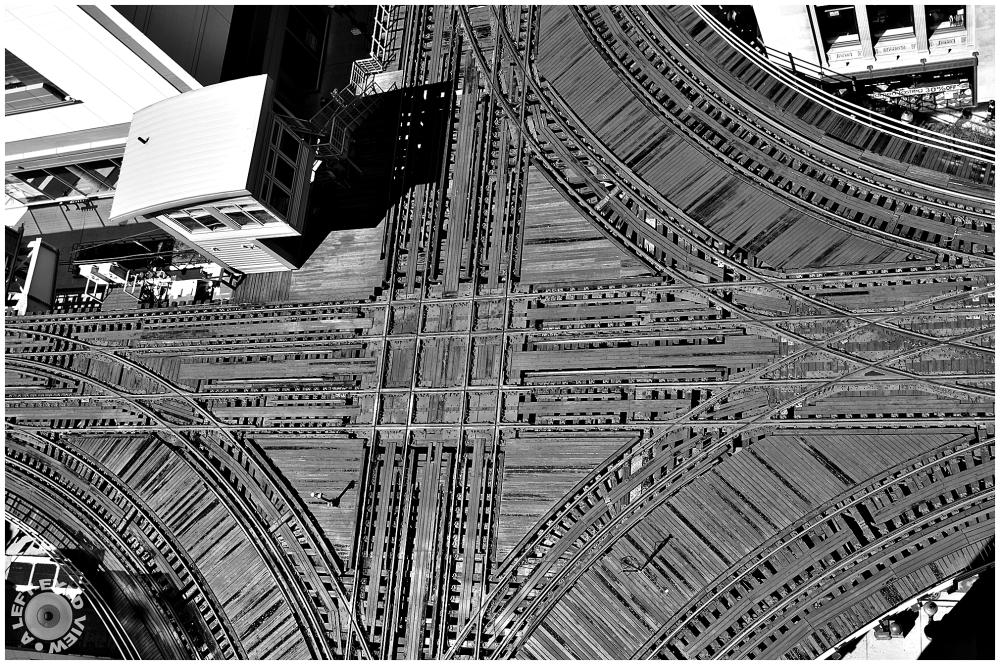 Posted by Steven (Chicagoland, United States) on 1 May 2014 in Transportation and Portfolio.

The elevated tracks of Chicago's transit system, commonly referred to as "The El" ("El" for elevated) as captured from the rooftop of the parking garage at 177 N. Wells Street. These tracks converge at the intersection of Lake Street and Wells Street.

I made the mistake of going to the wrong parking garage "on the corner of Lake Street and Wells Street" the first time at 210 N. Wells Street, which cost me a lot of money for my five-minute stay.

I may want to go back on another day and perhaps use a fish-eye lens to capture this same scene. I also will not be afraid to capture a portion of the parking garage's facade, noting how much of the tracks were cut off from the bottom.

Looks a real bad spot to have a signalling failure . . but what a brave transport solution this still represents.

Fantastic point of view on this combination of straight and curve lines. It looks great in B&W

Wow - this is a remarkable bird's eye view. Super in mono as well.

Amazing view, no cars here. Super location for you.

Great point of view, I could spend some time shooting from this roof top.

I'm dizzy from this great POV.

You took excellent advantage of this unique viewpoint to get an outstanding graphic image of these tracks. Very well done.

WOW! This is a fabulous viewpoint - creates quite a wonderful graphic

Fantastic graphic! Amazing how they tracks all seem to run together! Wonderful perspective!

Wow, that's a super shot, Steven ... all those old, wooden ties holding the rails in the puzzle.

It's a fascinating view...

Rail yards are always such great places to shoot. This is a terrific shot.

Fine shot from an unusual location,

Intriguing angle shot !! Looking down elevated tracks from a a parking lot is impressive. You took a lot of times to find your car after taking photos, didn't you? That didn't so nice, but you captured this excelent picture owing to your mistake. Excellent monochrome. Have a nice day, Steven. :)

wow Steven that is an amazing "convergence" - A very superb composition !! Beautiful fine detail and the light here is so superb !!!! A fantastic composition !!!!!!

This is an outstanding image. A fisheye view would, I'm sure, be very cool, too.

A excellent composition with a marvelous perspective to the shot ! Beautifully captured and presented .