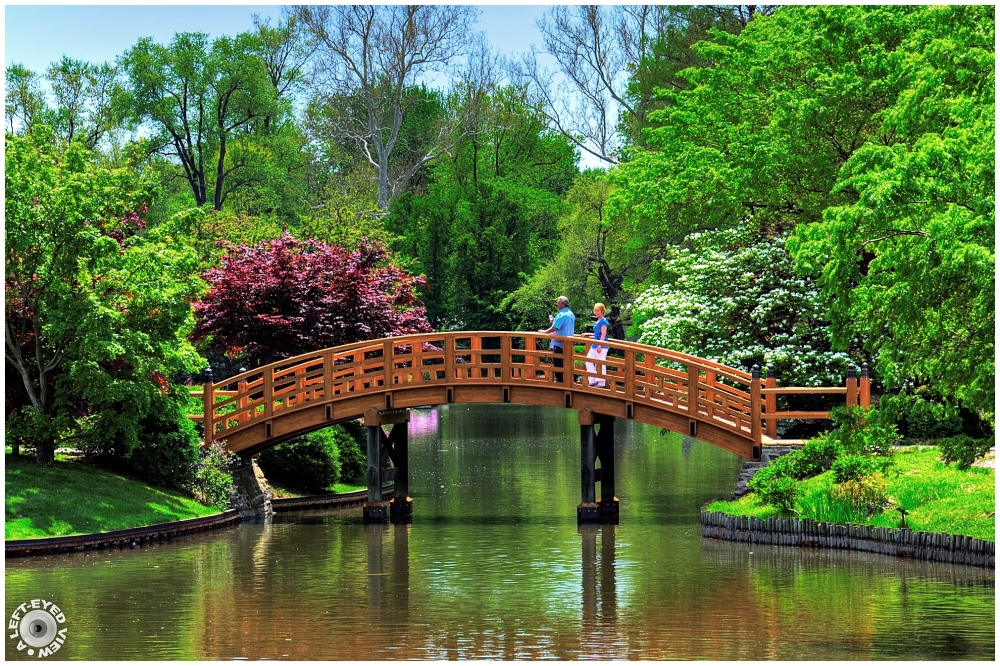 Posted by Steven (Chicagoland, United States) on 16 May 2014 in Landscape & Rural and Portfolio.

The Japanese Garden at the Missouri Botanical Gardens in St. Louis incorporates the use of traditional Japanese bridges, intended not solely as a means of crossing from island to shore, but to provide points where garden visitors can enjoy viewing the water, the reflections of sunlight on foliage and the fish swimming below.

The first of these is the Drum Bridge, or Taikobashi, which connects Teahouse Island with the northwest mainland. Its name alludes to its round shape, which completes a circle in its own reflection in the water. It is constructed of redwood and is left unpainted to preserve its natural appearance. Bronze caps topping the four posts at each end of the Drum Bridge are called giboshi.

A glorious vibrant image and beautiful Zen-like mood of tranquility.

Excellent photo: light and the colors are gorgeous.

It looks so serene and peaceful there.

Gorgeous scene. The greens make it so inviting.

Lovely colours. That looks like a great place for a stroll.

Gorgeous light, color and reflections. What a beautiful place! The next time I visit St. Louis, I need to go there!

It made me thinking about Monet's The Japanese Bridge. I like it ,Well done.

Beautiful composition. I will have to go there sometime.

The bridges are beautiful objects that enhance the beauty of the garden plants. Nice photo.

A gorgeous photo. I love the spectacular bridge.

I love the vibrant mood you capture here.

Stunning rendition of the colors. A splendid image.

this is absolutely gorgeous Steven, I love the color and stillness of the water!

lovely compo and colours again ... what a tranquil and sooting place this seems to be !