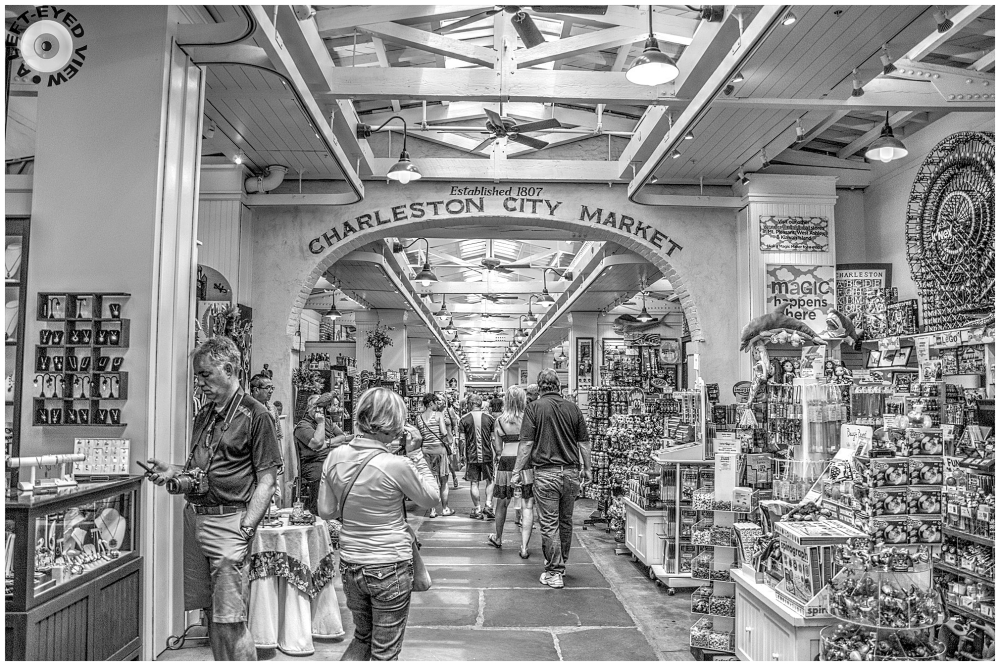 Posted by Steven (Chicagoland, United States) on 5 August 2014 in Documentary & Street and Portfolio.

A view captured from inside the historic Charleston City Market in Charleston, South Carolina.

On the exterior of the building is a historic marker, which reads:

"On this site stands one of Charleston's oldest public facilities in continuous use: the City Market. Earlier markets, dating back to the city's location to the peninsula, ca. 1680, offered meat, fish, and vegetables at different sites. After the American Revolution, however, the city sought to consolidate this activity in one location and chose the present site, which was then a creek and marsh extending from Meeting Street to the Cooper River, briefly designated Canal or Channel Street.

Six neighbors, among them Charles Cotesworth Pinckney, who owned the largest portion, donated land in March 1788, directing the city to open a market. By 1792, some marsh and creek had been filled and a brick market, 200 feet long, stood near Meeting Street. In late 1793, the city had converted that structure to house refugees from St. Domingo, and the land reverted to its original owners because market had not been erected within the specified time. Once the property was again donated to the city in 1804, construction resumed. The "Centre Market", consisting of separate sheds for fresh meats and vegetables, opened 1 August 1807, while sheds for fish and "small meats" opened later. Here, the city's population, both slave and free, gathered daily to buy and sell locally-raised commodities and imported delicacies.

Market Hall, designed by E.B. White and built for the meetings of the market commissioners and others, opened in 1841 on the site of the original depot for country wagons. The rise of grocery stores and refrigeration in the early twentieth century sapped the market's vitality, and its fortunes steadily declined. Renewal projects in the 1970's attracted visitors seeking souvenirs rather than groceries.

The Market was placed on the National Register of Historic Places in 1973 and designated a National Historic Landmark in 1975. Although damaged by fires, tornadoes, hurricanes and an earthquake, the City Market continues to function as one of Charleston's most cherished institutions."

This shot is a fine capture of the historic public place. I liked it in black and white.

The treatment is a combination of classic and artistic -fabulous image

Interesting PP on this shot.

Incredible depth and the effects leave the people looking natural which is the
hardest part, absolutely beautiful, 5 *****' !~

That has a very cool 3D effect.

A fabulous image! I love the b&w and the processing! It is fantastic! A wonderful scene!

I love this processing. Is it Nik Silver efex?

@Harry: It's the pencil filter from PhotoScape.

A fabulous image and wonderful view of this historic place. Lovely processing. :)

Some amazing history. It's interesting the donated land reverted to the original owners because the city couldn't get moving on the building project. Sounds like things today.