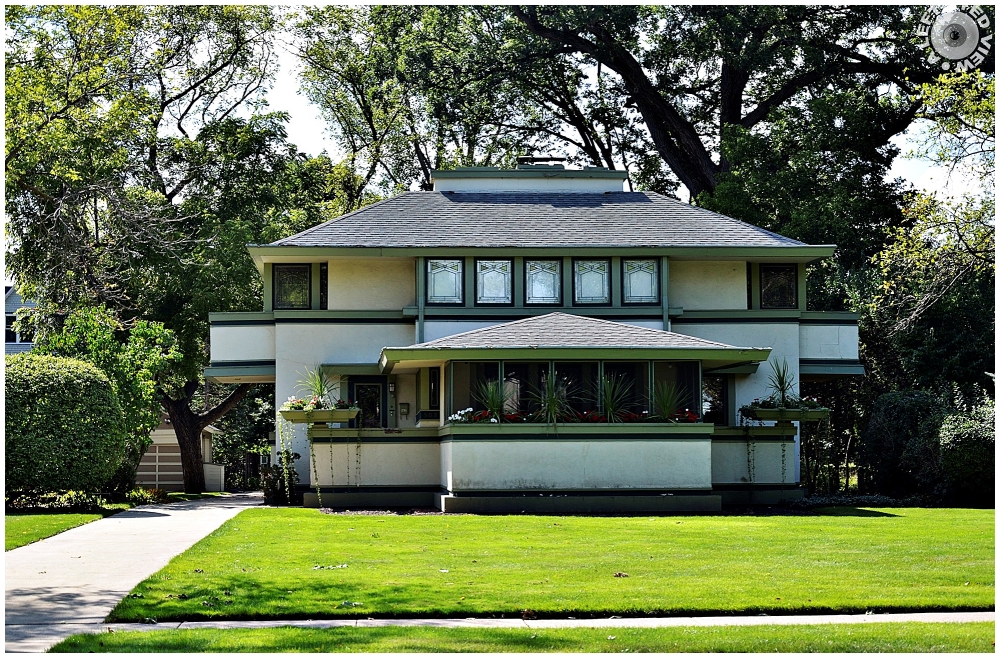 Posted by Steven (Chicagoland, United States) on 10 September 2014 in Architecture and Portfolio.

The J Kibben Ingalls House was designed by Frank Lloyd Wright in 1909, the same year he closed down his studio in Oak Park for a brief escape to Europe with his mistress, Mamah Cheney. The Ingalls House is an example of a fully mature Prairie Style house. Earlier photographs show the J Kibben Ingalls House with brown trim and dark brown shingles on the roof. Today, the house has green trim with light grey shingles. It is symmetrical in its massing and displays all of the features of a fully mature Prairie Style house: concrete water table, strong, horizontal lines, screens of art glass windows, low hipped roofs, broad central chimney, and stucco exterior. Cantilevered balconies flank the J Kibben Ingalls House on either side. The horizontally streamlined planters on the lower floor were probably not an original part of Frank Lloyd Wright's design for the house as they are not seen in earlier photographs of the house.

Interesting to compare with the Winslow residence shown the other day. Thanks for the info, too.

Another nice building. Is interesting to compare with yesterday. Once again good information. Thanks

Oh .. I see that I agree with the comment from Ronnie. It's almost identical.

A fine picture of this beautiful house designed by the famous person. I like the pristine look of the house. Unusual and very attractive.

love your foray into architecture in your last few posts!
fran lloyd wrighr's attractive homes and the interiour of this magnificent church .. so different, yet all masterpieces !

Splendid photograph of the building so characteristic of the Prairy style. I guess these buildings are closed to the ones at Oak Park.

His houses are still beautiful today and will be a hundred years from now. A super photo of this beautiful place.

I have always loved your interest in architecture and you always show us some of the
best, with this entry at the tops again on this site. There is great design here, a bit
before its time, which makes it that much more interesting.

A gorgeous image. The house is just beautiful. I love the balconies on either side and the windows. I think that the large planters add to the overall beauty of the house. I love the architecture!

I take it that River Forest is an upscale neighborhood with all of these historical structures.
It must be amazing to own one of these.

@Judy aka L@dybug: River Forest is indeed upscale. Property values are quite high. It is nice to own one, but you lose your privacy when so many people are taking photos of your home. Tours come through the area many times a week.