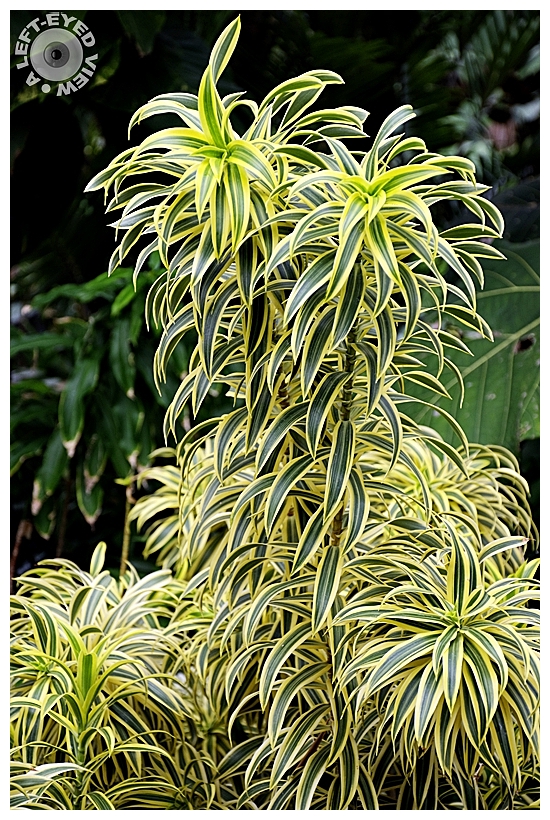 Posted by Steven (Chicagoland, United States) on 8 December 2014 in Plant & Nature and Portfolio.

Song of India, is a species of Dracaena which is a tropical tree native to Madagascar, Mauritius, and other nearby islands of the Indian Ocean. It is widely grown as an ornamental plant and houseplant, valued for its richly coloured, evergreen leaves, and thick, irregular stems.

Dracaena reflexa is a popular ornamental plant, both in the landscape and the home. It can be enjoyed as a specimen plant, accent, or pruned to create a border. Several cultivars have been selected, particularly variegated clones with cream and yellow-green margins. It performs well as a houseplant, tolerating infrequent waterings. It prefers bright, filtered light, without direct sun exposure. Although it can survive in relatively low light levels, the plant may grow spindly if given insufficient light. When grown indoors, temperatures of 64 °F to 77 °F should be maintained. It can be propagated via herbaceous stem cuttings.

Traditional medicine practitioners of Madagascar have long believed Dracaena reflexa to cure malarial symptoms, poisoning, dysentery, diarrhea, dysmenorrhea, and to be useful as an antipyretic and hemostatic agent. The leaves and bark are mixed with parts of a number of other native plants and mixed into herbal teas. Its effectiveness in any such treatment remains unproven.

Photo captured at the Garfield Park Conservatory in Chicago, Illinois on March 22, 2014.

I think I have some of this in a pot . . no comparison though !

Oh! Dracena magnificent! What a beautiful name. Thank you very much for your explanation! Best, Adela

Love the details and the close framing

A treat for the eye. Beautiful image.

Sorry Romero (ahead of me) ... 'eye candy' was what immediately came to my mind! ;D

Wow! This is just beautiful! Gorgeous light, color and detail. A fabulous image!

That is very a nice shot.

I've never seen this plant look so beautiful. I love the colors.

i admire how effortlessly you switch from outstanding architecture photography to equally outstanding plant photography! this image is fantastic again, especially its colour scheme and use of light. (plus - i like dracaena and have one myself !)