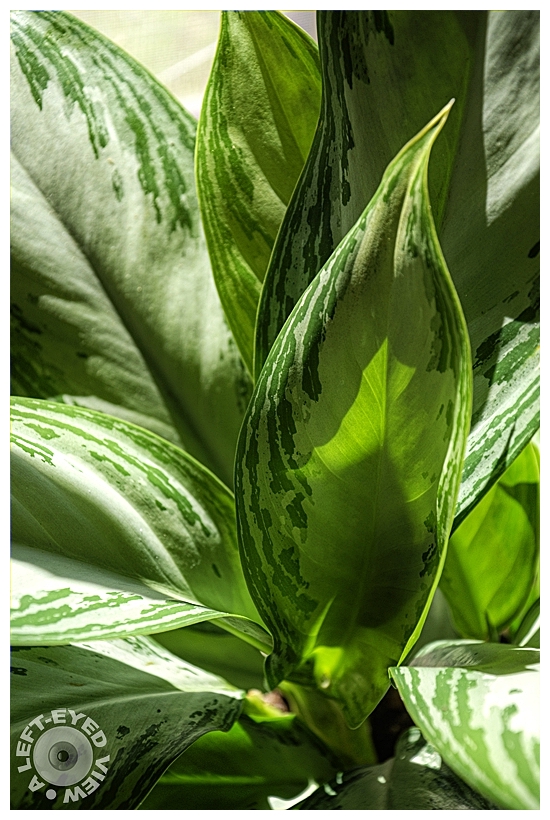 Posted by Steven (Chicagoland, United States) on 16 December 2014 in Plant & Nature and Portfolio.

Aglaonema is a genus of flowering plants in the arum family, Araceae. They are native to tropical and subtropical regions of Asia and New Guinea. They are known commonly as Chinese evergreens.

Aglaonema have been grown as luck-bringing ornamental plants in Asia for centuries. They were introduced to the West in 1885, when they were first brought to the Royal Botanic Gardens, Kew. They have been cultivated, hybridized, and bred into a wide array of cultivars. They live in low-light conditions and are popular houseplants.

This mainly tropical genus is known for its intolerance of cold temperatures. Chilling injury can begin at 59 °F. The injury manifests in dark, greasy-looking patches on the foliage.

Cultivars have been selected for their shape and size, and especially for the color and pattern of the leaves. Many have white or cream-colored stems. Some have also been developed to tolerate colder temperatures. The most common cultivar is 'Silver Queen', which has gained the Royal Horticultural Society's Award of Garden Merit.

Most propagation of Aglaonema is done with cuttings and by dividing the basal shoots. Care of the houseplant involves protecting it from cold temperatures and excessive sunlight and removing any inflorescences that develop, which can prolong the life of the plant. It requires moist soil, and while some cultivars require a small amount of fertilizer, plants are easily injured when over-supplemented. Aglaonema are prone to false mites (Brevipalpus californicus. They may also acquire populations of nematodes, such as root-knot nematodes and Pratylenchus species, which cause root lesions. Pathogens include the fungus Myrothecium roridum and bacteria such as Pseudomonas cichorii, Erwinia chrysanthemi, and Xanthomonas campestris, which can all cause leaf spot. Colletotrichum fungi can cause anthracnose.

Aglaonema plants are poisonous due to calcium oxalate crystals. If ingested they cause irritation of the mucous membranes, and the juice can cause skin irritation and painful rash.

Beautiful to look at but from a distance!

A beautiful capture with wonderful light of this very special plant. A plant that must not be eaten !!

Beautiful shades of green. A nice way to filll the frame. Interesting info as well.

the translucent feeling here is quite enchanting! interesting info as well - you never know what you harbour in your home ... ;-)

we have this plant in our home ^_^
lovely green plant :)

Wonderful lines and textures in this image.

I love the light and the shapeliness of these leaves

very nice
it green is so beautiful
:)

A beautiful capture of this lovely plant.

This is just beautiful! These leaves have gorgeous colors and patterns. I love all the shades of green. A beautiful composition!