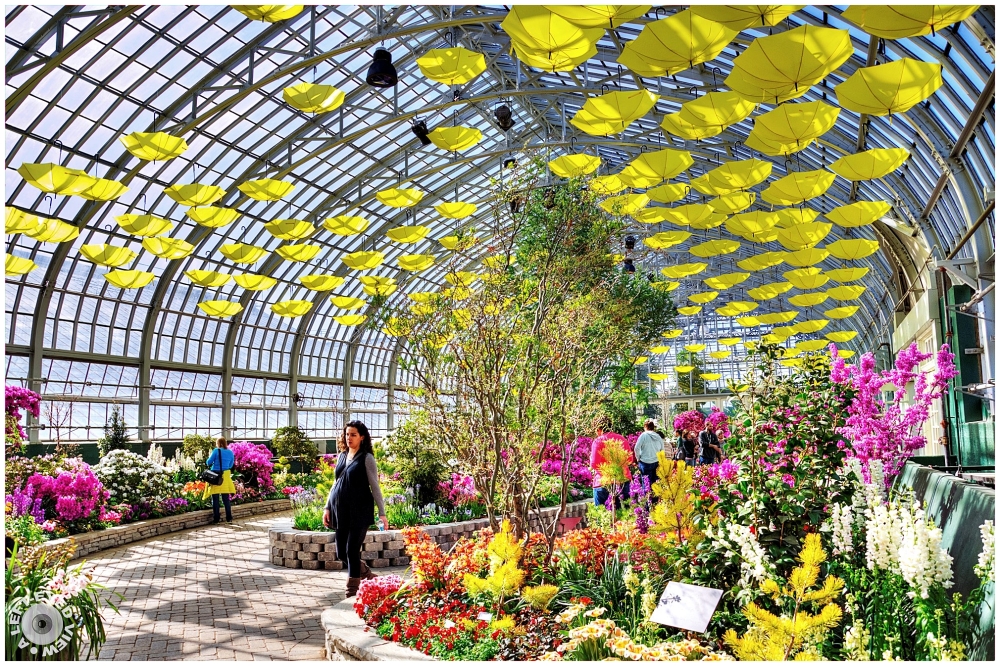 Posted by Steven (Chicagoland, United States) on 12 March 2015 in Plant & Nature and Portfolio.

Garfield Park Conservatory’s 2015 Spring Show, “Sun Showers,” opened on February 14, 2015. Continuing the Conservatory’s grand reopening year theme, Sun Showers celebrates the revival of the Show House and its seasonal shows following the terrible hail storm from June 30, 2011 which left much of the Conservatory severely damaged with so many panes of glass shattered. More than 200 yellow umbrellas hang from the glass ceiling, celebrating both the rain and sun that bring us hopeful spring flowers.

Hundreds of blossoms including azaleas, camellias, daffodils, hyacinths, hydrangea, orchids, and tulips fill the room with their beauty and aroma. The Spring Show reminds Chicagoans in the midst of winter that warmer weather and colorful gardens are soon to follow.

So colorful, you just can't stop on one point! Very nice

lovely light/colour and a great use of umbrellas :)

What a beautiful, colorful image. I like a lot.:-)

What a splendour displayed under glass! Exactly what I NEEDED right now! You give me joy with the shot! Please...add some more!

This is a fine picture of this fabulous place. The upside down umbrellas is a nice touch.

Everything is blossoming just in time ... including the woman in the foreground.
Was that intentional? <grin>

What a gorgeous combination of light, colors, and detail!

Ahh I miss the spring shows. Nicely captured and presented.

Lots of color here to brighten anyone's day.... and of course yellow is a happy color and this gives me hope to see the coming Spring soon! We used to grow ornamental plants in our greenhouses and these are a reminder of those years! Such a beautiful composition, I love all those umbrellas!!

This has a magical look! Lovely

so much colour, wonderful, new life in nature (flora) and new life with the pregnant woman in the foreground.

This is just gorgeous! I love all the bright colors and the umbrellas hanging from the ceiling. Such a happy springlike feeling! This is beautiful!

What an exquisite building. It almost makes me sneeze.

The yellow umbrellas add a extra jolt of spring color to this fine greenhouse scene.

A fine picture of this wonderful place! Excellent!

A marvelous image with beautiful colors and light !

Great shot and beautiful light. I like the sensational explosion of colour!

a great evenement to see

Beautiful & colorful scene! A pleasant place to be.

A beautiful place with wonderful colors and light ... Splendid image !!!

This photo could not get more 'spring' in contents.

Love the sheer vibrancy of this image.