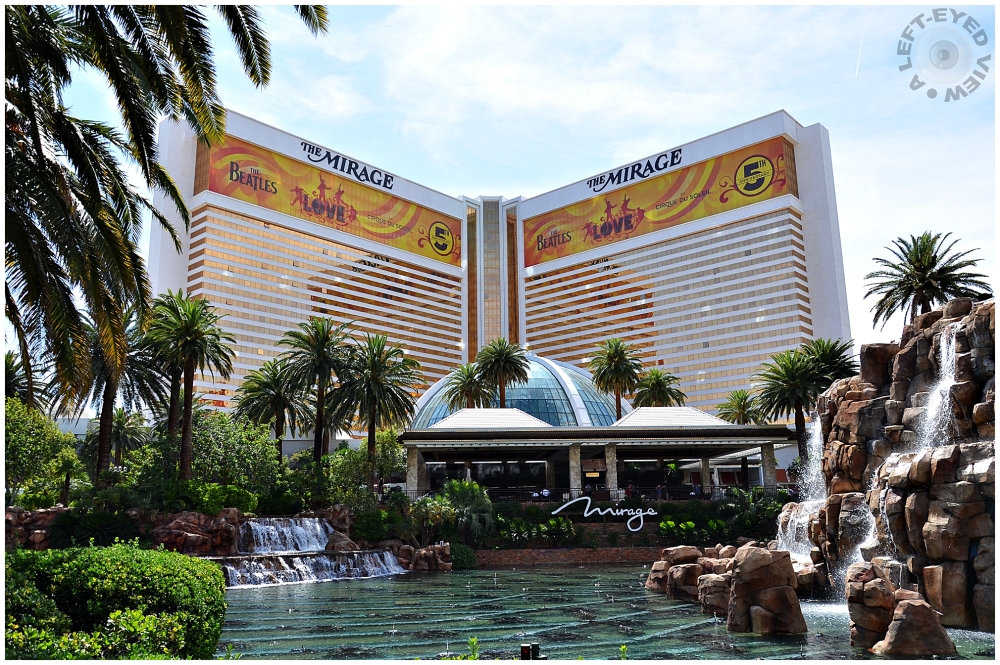 Posted by Steven (Chicagoland, United States) on 20 April 2015 in Lifestyle & Culture and Portfolio.

The Mirage is a 3,044 room hotel and casino resort located on the Las Vegas Strip. The marquee in front of the Mirage is the largest free standing marquee in the world. The Mirage was built by developer Steve Wynn and designed by Joel Bergman. It opened in November 1989 and was the first resort that was built with the money of Wall Street through the use of junk bonds. It was built on the site, formerly occupied by the Castaways and previous to that, the Red Rooster Nite Club.

The Mirage was the most expensive hotel-casino in history, with a construction cost of $630 million. The hotel's distinctive gold windows get their color from actual gold dust used in the tinting process. It was reported that the resort would have to bring in a million dollars a day to pay off a 7-year construction loan. But in fact The Mirage did so well, the loan was paid off in just 18 months.

Its construction is also considered very noteworthy in that Wynn had set a new standard for Vegas resorts, and is widely considered to be the father of today's Las Vegas. Prior to The Mirage's opening, the city was experiencing a decline in tourism that began in the 70's, especially around the time that the state of New Jersey legalized gambling and tourists (in particular those on the East Coast) began to frequent the casinos of Atlantic City. Also, this was a time when Las Vegas was no longer considered a fashionable destination, so a new, high-profile, project was necessary to jump-start the ailing industry. When it opened, The Mirage was the first casino to use security cameras full time on all table games.

Beautifully composed and I LIKE THE FEELING OF SYMMETRY

Beautiful framing of the resort. The waterfalls and the gardens create a very nice environment.

That hotel is gigantic! Beautiful frame. I would love to stay there!

That is very nicely shot.