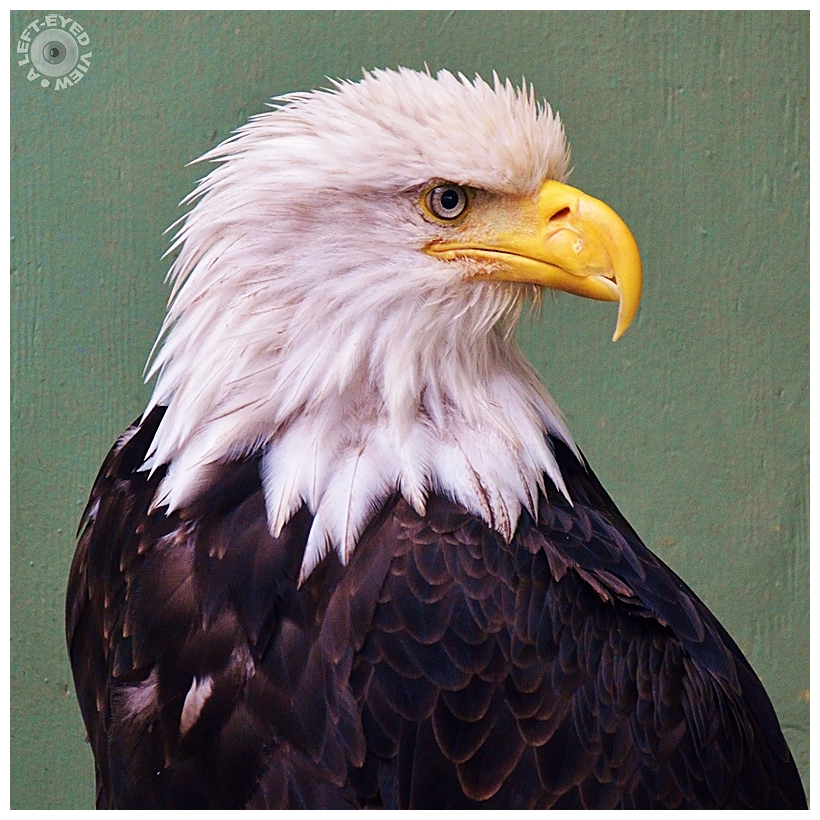 Posted by Steven (Chicagoland, United States) on 24 February 2016 in Animal & Insect and Portfolio.

In May of 2006, Lady Baltimore was found injured on Juneau's Douglas Island. She had been shot in her beak and the wrist of her right wing. Also, her left eye is completely blind from a detached retina . The impact of the bullet through her beak may have been the cause of the detached retina. With only one working eye, she doesn't have depth perception. Because of this, she has a tendency to run into things and wouldn't be able to hunt for her own food in the wild. The injury to her wing prevents her from achieving lift above six feet into the air. She is not releasable to the wild because these injuries are permanent and she would not survive on her own. The poacher was never caught.

It is estimated that Lady Baltimore was on her own for about two weeks with these injuries until someone found her. The reason for this estimation is due to her weight. She was about six pounds when she was found, where she is now about eleven pounds. She was originally thought to be a male because she was so light. Therefore, her name originally was Lord Baltimore.

The Juneau Raptor Center is a volunteer, non-profit organization that has served the community of Juneau since 1987. The Center has a dual mission:

They provide treatment and rehabilitation for injured wild birds from all over Southeast Alaska; and they provide education about wildlife to the public.

A very fine portrait to accompany this sad story . . good to know she is in safe hands.

A beautiful and powerful bird. The details are impressive.

Poor girl! I'm glad she was found and saved. You have taken a beautiful portrait of this still proud bird. Poachers makke me sick!

It must be terrible when she was injured and alone ...A superb portrait !

What a striking portrait and back story

a sad story with a happy end at least, and a terrific avian portrait! what a majestic bird ... no wonder it's a national symbol, too!

Beautiful and unique photo - nature and its resilience is so inspiring and you capture that so well in this image and accompanying story.

What a great shot!

A magnificent image and a poignant story

A spectacular portrait-type picture of this magnificent bird.

Wonderful pose. She cannot be free but at least she is being taken care.

A sad story with a happy ending ... and still she looks so majestic !!! Beautiful image ...

Excellent photo. These bird rescue organizations also allow us to see these magnificent birds up close.

That's definitely a great story behind a good portrait. Amazing. Thanks for sharing !

A beautiful proud bird ... the information on the condition of the bird when he was found is very sad ... I am glad that it ended well ... it is good that there are people who are to take care of threatened or sick animals ...
a beautiful photo ... I like your picture, the clear details and natural colors ... thank you very much for show and information ... 5*****

What a beauty. Great shot.

This is an excellent photo of this majestic bird ... thank you for the informative narrative - it is a shame that the poacher was never caught. Hopefully it is still an open investigation.

A gorgeous portrait! This is just fabulous. I am glad that they were able to save her, I read in the newspaper that 9 bald eagles were found dead on the eastern shore of Maryland. They are still trying to determine if they were poisoned, maybe by poisoning mice and then the birds ate them. It was very sad.

A beautiful portrait. The world is full of idiots. That poacher is major league.

A wonderful portrait of this regal bird. Thank you for sharing her sad story, and for your efforts to maintain her health.

Beautiful portrait of this magnificent bird. And a sad story with a happy end. Great work. :)