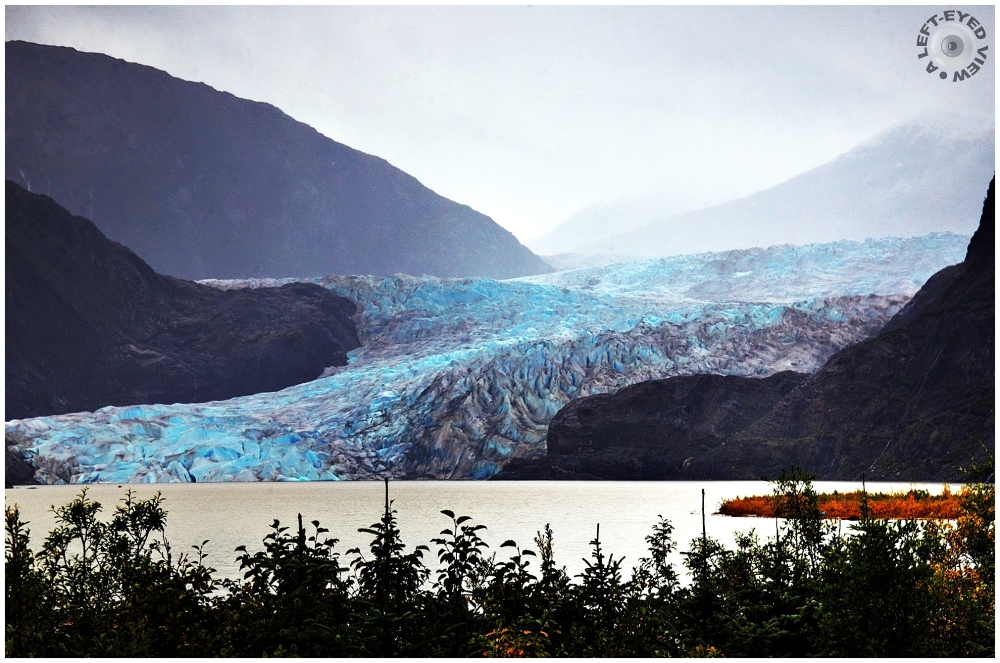 Posted by Steven (Chicagoland, United States) on 29 February 2016 in Landscape & Rural and Portfolio.

Mendenhall Glacier is a glacier about 13.6 miles long located in Mendenhall Valley, about 12 miles from downtown Juneau in the southeast area of the U.S. state of Alaska. The glacier and surrounding landscape is protected as the 5,815-acre Mendenhall Glacier Recreation Area, a federally designated unit of the Tongass National Forest.

The Juneau Icefield Research Program has monitored the outlet glaciers of the Juneau Icefield since 1942, including Mendenhall Glacier. The glacier has also retreated 1.75 miles since 1958, when Mendenhall Lake was created, and over 2.5 miles since 1500. The end of the glacier currently has a negative glacier mass balance and will continue to retreat in the foreseeable future.

Given that average yearly temperatures are currently increasing, and the outlook is for this trend to continue, it is actually possible that the glacier might experience a period of stabilization or slight advance during its retreating march. This is because increasing amounts of warm, moist air will be carried up to the head of the icefield, where colder ambient temperatures will cause it to precipitate as snow. The increased amount of snow will feed the icefield, possibly enough to offset the continually increasing melting experienced at the glacier's terminus. However, this interesting phenomenon will fade away if temperatures continue to climb, since the head of the glacier will no longer have cold enough ambient temperatures to cause snow to precipitate.

The retreat of the Mendenhall Glacier and other glaciers in the area is believed by some to be a result of broader retreat and breakup of the Juneau Icefield. The Juneau Icefield is the fifth largest icefield in North America. For many populations near glacial areas these glaciers are a source of fresh drinking water. Once these glaciers are gone the people relying on this fresh water will be out of their familiar fresh water source. For example, Anchorage is one of the most populated cities in Alaska and many people in this city rely on the Eklutna glacier for their freshwater. If the recession of this glacier continues they will be out of their main source of water. However, Alaska has been receiving record snowfall in the last decade. Snow is the main factor that causes glaciers to advance.

Although there are many negative effects of the recession of the Mendenhall Glacier and glaciers in general, there are also a few positive outcomes from it as well. With the retreat of the Mendenhall Glacier, the Mendenhall Lake has formed. The lake is a result of the run-off from the glacier and is increasing in size as the glacier continues to retreat. The lake began formation in 1931 and has continued to grow since then. The lake has its own unique ecosystem and is a popular location for sport fishing; fishers can find salmon and trout in the lake.

As of recently, a new discovery has been made regarding the Mendenhall Glacier and its retreat. In 2012, tree stumps and logs with roots and bark still attached have been appearing from under the glacier as it has been retreating. They are being found in their original growth position, preserved by what was believed to be a protective gravel casing covering them. By uncovering these tree stumps and logs, scientists are able to uncover information on the ecosystem's past, from a pre-glacial time. Scientists observing the area are able to determine how old the trees were when they died by looking at their preserved remains. One of the scientists, Cathy Conner, reported that the most recent stumps she’s dated emerging from the Mendenhall Glacier are between 1,400 and 1,200 years old. The oldest she’s tested are around 2,350 years old. She’s also dated some at around 1,870 to 2,000 years old.

In tomorrow's post, you'll see from where this shot was taken and how the sense of scale is a bit overwhelming.

A lot of power coming thru there . .

Spent some time climbing over glaciers in the Alps in my youth, they are such amazing places. Terrific image and info Steven

A beautiful image of this famous glacier. Excellent background information.

Very impressive shot and interesting note about this big glacier! Thank you for sharing.

a beautiful sight to enjoy (as long as it's there ...), and a sad story about the gradual disappearance of the glaciers, same as in the alps and elsewhere! i remember standing at this spot more than ten years ago and feeling dwarfed by what i was seeing ...

Unluckily, we don't know until when it'll be possible to enjoy this kind of images...
Luckily, you captured an impressive view here.

Stunning image !!! The glacier colors still amaze me ...
Must be awesome to find those ancient trees under this impressive ice mass ...

My how that has changed since we lived in Juneau in the late 70s and early 80s. Ellie and I took a mountaineering and skiing trip up on the glacier and ice field.

An amazing image! Even though it is retreating, it is still gigantic. It is interesting what they are finding as the glacier retreats. What a magnificent sight! Very informative narrative.

That is gorgeous. Such beautiful colours.

very impressive and interesting ... I like the view over the front plant to the glacier ... thank you for the interesting information ...

Amazing how the science can work in this situation with everything connected. Beautiful framing and stunning shot.