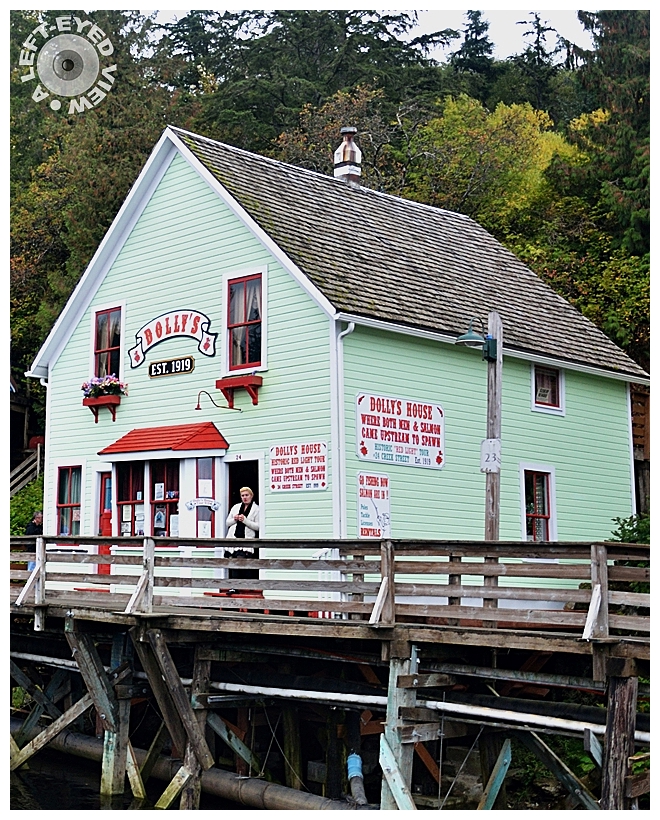 Posted by Steven (Chicagoland, United States) on 13 April 2016 in Business & Industry and Portfolio.

Dolly Arthur left her family home in rural Idaho at age 13, living in Montana and Vancouver British Columbia before making her way to Alaska. By her late teens she realized she could make more money from the attention of men than she could working as a waitress. In 1919, she wound up in Alaska, having discovered a way she could make a significant amount of money for that era. Dolly spent her first year in Ketchikan at the Star, the only house on Creek Street actually classified as a brothel because it employed more than two women. Then she bought her own house.

At a time when the average Ketchikan worker made $1 a day, Dolly charged each man $3 and didn’t close her door for the night until she had made $75. She bought her house for $800 and paid it off in two weeks. Eventually she bought other houses along Creek Street, which she rented to other working girls. They referred to themselves as “sporting women” rather than whores, and prospered in a town with many single men and few women. Though most Creek Street residents worked in pairs, Dolly worked alone in her own house. Through all her working years, she never got an STD.

An interesting explanation on the story of Dolly.
The house looks very well maintained.

A success story/storey of a different kind !

A very interesting story! I'm sorry I missed this historic area when I visited Ketchikan a couple of years ago.

Great shot of this Dolly's house. And interesting story. :)

what a remarkable career that you describe here! and i see the 'red lantern' so typical of that kind of establishment has been replaced by red flower boxes ... ;-)

The true entrepreneurial spirit. Nicely composed and would that be a sporting woman in the doorway? :)

Good shot of this place with a interesting history behind.

Her house is very attractive and get lifestyle amazing.

It does have an inviting look from this point of view

A good story accompanied by an excellent image. I like the house Dolly!

Ah, and there is the aforementioned Dolly. I immediately thought of the movie, Best Little Whorehouse in Texas.

Thank you for the story.
Very nice shot.
Have a good night, Steven.
Yvon.

Dolly's ghost seems to be waiting for gentleman callers even now. Dolly made a go of it in a tough mining town. I think she was not to be underestimated. I enjoy the photo and great backstory.

Very nice picture and I really liked reading the information. Hmmm, I need to pay my house off :-)

Seems like Dolly was a very good business woman. A wonderful image and great history!

I remember this from our trip. Cool memory!

* You were the only one who "got it" yesterday on my longhorn shot and the heart. ;-)