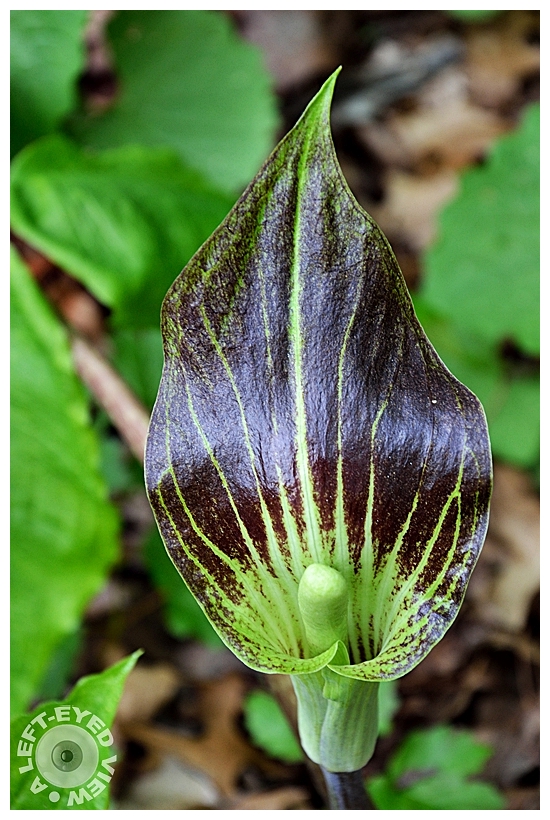 Jack in the Pulpit (Arisaema triphyllum)

Posted by Steven (Chicagoland, United States) on 24 May 2016 in Plant & Nature and Portfolio.

Jack-in-the-pulpit is an intriguing wildflower native to eastern and midwestern North America, but is easily grown in shade gardens elsewhere. It gets its common name from its odd flower: a pouch-shaped spathe ("pulpit") with an overhanging hood that surrounds a fingerlike central spadix ("jack"). Here, I have lifted the hood to stand up and reveal eye-catching markings and the spadix. Normally, the hood lays down over the spadix.

Jack-in-the-pulpit produces one to two 3-lobed leaves 12 to 18 inches high. The leaves appear in early spring as does the flower, which is composed of a green-and-purple striped spathe bent over at its tip to partly hide the green club-like spadix. After the flower fades, a cluster of bright red berries appears and lasts for much of the summer. The leaves fade away in mid-summer if the plant is not watered regularly but grow back in spring from an underground tuber.

The colors are full of life.

You got the depth of field just perfect here. Excellent plant shot

That is lovely detail and color.

It has very nice color

A fine picture of one to go with the detailed description.

Wonderful shot. I always thought that name was so funny for a plant.

Wow !! I've never seen one of these! is a splendid flower. Thanks

I love your clarity and focus

Such a handsome plant. I've heard of these but never seen one. An excellent image.

superb with this light!

That is a beauty.