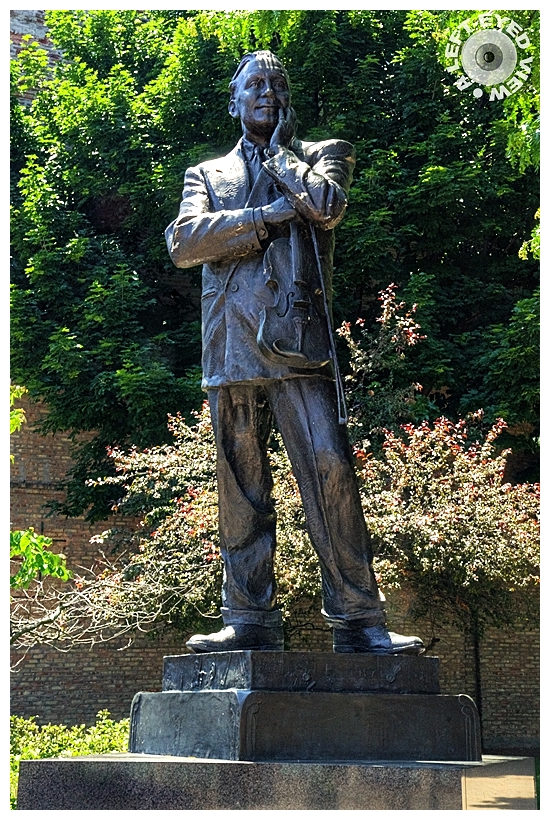 Posted by Steven (Chicagoland, United States) on 11 July 2016 in People & Portrait and Portfolio.

Jack Benny was one of the first major radio personalities to make the successful transition to television. A huge star on radio ever since his 1932 debut on the Ed Sullivan show, Jack Benny's own television show premiered on CBS on October 28, 1950. This immensely popular show remained on the air for 15 years. Always loyal to his hometown of Waukegan, he frequently mentioned the city in his broadcasts, putting Waukegan on the map and forever linking himself with the city in which he was raised.

Jack Benny was born Benjamin Kubelsky on February 14, 1894 to Mayer and Emma Kubelsky. A younger sister Florence followed seven years later. The family resided in many different apartments and rented houses during Benny's childhood. His father was the proprietor of the Lake County Wine & Liquor Company, and later was a partner in a furniture and clothing business called Kubelsky & Gordon.

In 1909, the family rented the house at 518 Clayton Street, and they remained here through 1910. This was an important time in young Benny's life. He had learned to play the violin at an early age, and in 1910, while living in the house, received his first break, obtaining a job playing the violin in the pit of the Barrison Theatre, which was located at 25 S. Genesee Street. He eventually developed a vaudeville act of his own known as Salisbury and Benny, developing his trademark penny-pinching persona and impeccable sense of timing. He married Sadie Marks in a friend's apartment at the Clayton Hotel on January 14, 1927.

Even after achieving stardom, Benny never forgot his roots, and frequently returned to Waukegan, where his parents and sister are buried. His visits, known as "Jack Benny Days," brought out brass bands and huge crowds of fans. The largest of these events was the world premiere of his movie "Man About Town" at the Genesee Theatre on June 25, 1939. His final visit occurred in 1974 when he gave a benefit performance with the newly formed Waukegan Symphony Orchestra. He died in December of that year at the age of 80.

Difficult to believe he died over 40 years ago . . a memorable character for sure.

A great comedian. I wonder how his sick alligator is.

Superb capture of his statue and great tribute !

His classic pose is captured so well here. Fabulous image!

Quite a personality. And never loosing touch with his origins.

He was, indeed, quite a character. An excellent image of the statue.

Nice shot. I love Jack Benny. I was watching old videos of his the other day.

A wonderful statue and true likeness. I must be feeling my age, I remember watching his show with my parents when I was a child!

Excellent image of this beautiful statue. And interesting information of this star. :)

I did not know who was Jack Benny. But today I learned a little more of the US cultural history.