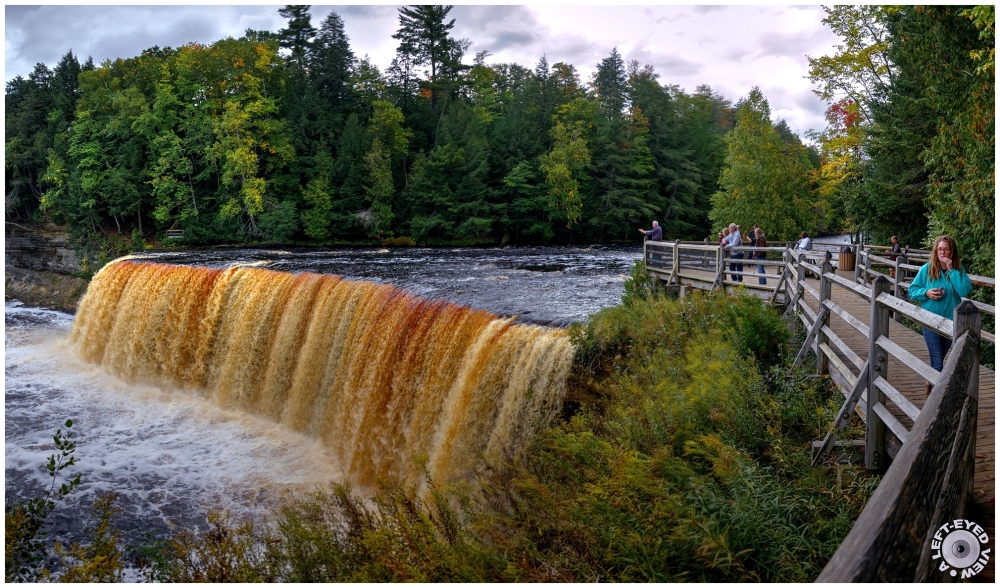 Posted by Steven (Chicagoland, United States) on 1 November 2016 in Landscape & Rural and Portfolio.

The Tahquamenon Falls are two different waterfalls on the Tahquamenon River. Both sets are located near Lake Superior in the eastern Upper Peninsula of Michigan. The water is notably brown in color from the tannins leached from the cedar swamps which the river drains. The Upper Falls are more than 200 feet across and with a drop of approximately 48 feet. During the late spring runoff, the river drains as much as 50,000 gallons of water per second, making the upper falls the third most voluminous vertical waterfall east of the Mississippi River, after Niagara Falls and Cohoes Falls, both in New York State.

The Lower Falls, located four miles downstream, are a series of five smaller falls cascading around an island which can be reached by rowboat. A hiking trail runs between the falls along the riverside, and visitors often play in the lower falls during the summer heat.

The falls are within Tahquamenon Falls State Park, between Newberry and Paradise, Michigan. They are a popular tourist destination in the Upper Peninsula during all seasons.

Beautiful panorama encompassing the boardwalk and the river. The organic charge is quite noticeable.

Impressive - thanks for the info on the color !

Quite a view! Like a waterfall of tea :) Good to know the color is all natural.

Superb color and great capture of the water in this excellent image,

Superb work with the panorama and extraordinary colors.

Great capture. It's really impresive. Thanks for the info, too.

Nice panoramic. Lots of iron in that water, looks like.

What extraordinary colour in the falls. Does the water pass through peat?

So beautiful.... I like the walkway that gives an excellent view of the falls. The color of the water from the tannins is so cool. The Lower Falls sounds interesting too.... especially the hiking trail. Very nice indeed!!

The colour of the fall is unique. Great capture.

Love how the water falling has the golden fall colurs, superbly seen and
very well done photo, almost as if you are standing on air for the view !~

A fine picture of this falls. It has a strong volume of water.

Interesting how the falls brings out the color but the deeper water does not.

Wonderful colour to these falls

The colour of the fall is unique. Great capture. :)

The color is a bit startling until I read your explanation. A beautiful view

That is very nice. I sure like the deep colours in the vegetation.

I love the rusty/coppery tone in the spilling water. A fine falls to see and shoot.