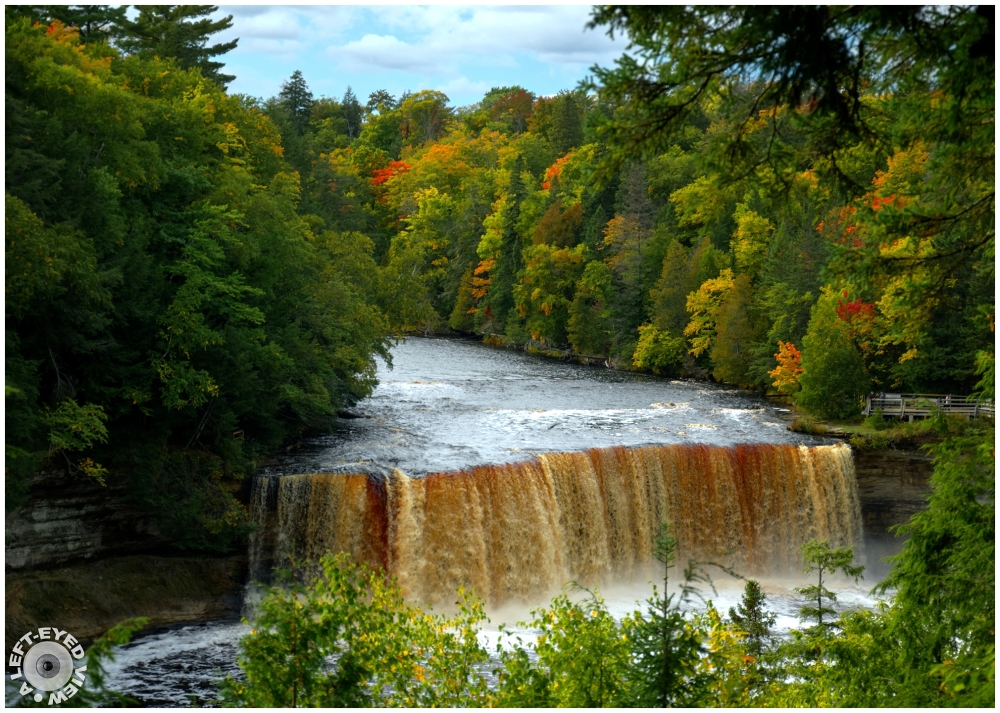 Posted by Steven (Chicagoland, United States) on 3 November 2016 in Landscape & Rural and Portfolio.

The Tahquamenon Falls are two different waterfalls on the Tahquamenon River. Both sets are located near Lake Superior in the eastern Upper Peninsula of Michigan. The water is notably brown in color from the tannins leached from the cedar swamps which the river drains. The Upper Falls are more than 200 feet across and with a drop of approximately 48 feet. During the late spring runoff, the river drains as much as 50,000 gallons of water per second, making the upper falls the third most voluminous vertical waterfall east of the Mississippi River, after Niagara Falls and Cohoes Falls, both in New York State.

The Lower Falls, located four miles downstream, are a series of five smaller falls cascading around an island which can be reached by rowboat. A hiking trail runs between the falls along the riverside, and visitors often play in the lower falls during the summer heat.

The falls are within Tahquamenon Falls State Park, between Newberry and Paradise, Michigan. They are a popular tourist destination in the Upper Peninsula during all seasons.

Great choice of viewpoint and a lovely colour composition

A gorgeous scene. Beautiful color and great capture of the water. 5*****

That is a great vantage point for taking this photo.... the falls are beautiful surrounded by all the trees that are just beginning to change in color. An excellent view!

Wow! What a beautiful scene! My favorite time of year...

We interrupt this program for the following announcement:

The Cubs won the World Series!!

Wow, that's great news for the Cubs and their fans! The waterfall is gorgeous. I like the color showing in the trees.

Amazing colours. Beautiful view of the water falls and a fine shot. Love this. :)

Congratulations to your CUBS!!!! Broke the curse!!!!
The colors are so vibrant. A peaceful yet powerful scene

A gorgeous image! I love the colors and point of view. A spectacular autumn image! 5*****

\the colours are so beautiful.

the falls are even more impressive from this angle. Good shot

I love waterfalls. Thanks for sharing.

Thanks for contributing your story to Aminus3 Discover. It has been posted here

Superb work of the photographer and of the mother nature.
Great capture. It's really impresive.

Congratulations for the Cubs!!! Now, let's not get used to that, winning every 100 years will make us appear presumptuous.
Besides, the images is gorgeous, but it doesn't matter now.

Great view of the falls, and I love the colors in the water as it spills over.

Great view with this colors!

Shame on me for living all my life in MI and never went to see it.

The hint of red are so welcome in the beautiful whole !