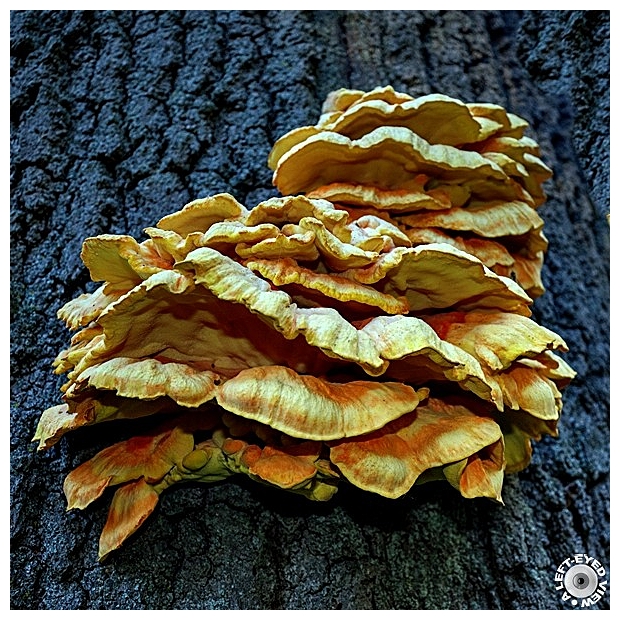 Posted by Steven (Chicagoland, United States) on 30 November 2016 in Plant & Nature and Portfolio.

The "Sulphur Shelf" fungus, a.k.a. "Chicken of the Woods".

Individual "shelves" range from 2"-10" across. These shelves are made up of many tiny tubular filaments (hyphae). The mushroom grows in large brackets - some have been found that weigh over 100 pounds. It is most commonly found on wounds of trees, mostly oak, though it is also frequently found on eucalyptus, yew, sweet chestnut, and willow, as well as conifers in some species. Laetiporus species produce brown rot in the host on which they grow.

Young fruiting bodies are characterized by a moist, rubbery, sulphur-yellow to orange body sometimes with bright orange tips. Older brackets become pale and brittle almost chalk-like, mildly pungent, and are often dotted with beetle or slug/woodlouse holes. This fungus causes a brown cubical rot and embrittlement which in later stages ends in the collapse of the host tree, as it can no longer flex and bend in the wind.

Excellent contrast of colors between the fungus and the trunk of the tree.
The level of detail is impeccable.
Well done!

excellent capture!!!! Wonderful against the bark..and thank you for all the information...Did learn something new today !

Excellent capture ! Can almost be caught !!

WOW. An impressive growth that makes a great subject for your excellent close up.

Beautiful close up. Lovely bright color and texture. I hear chicken of the woods are good to eat?

@Ruthiebear: I believe that is true. I thought maybe that's how it got its nickname "chicken of the woods."

That is very nicely shot. That fungus is sure stacked up beautifully.

A gorgeous shot of this handsome fungus. It's much prettier than the conks we have out here.

beautiful light on this fungus

Wow, I like this shot a lot ! Excellent details.