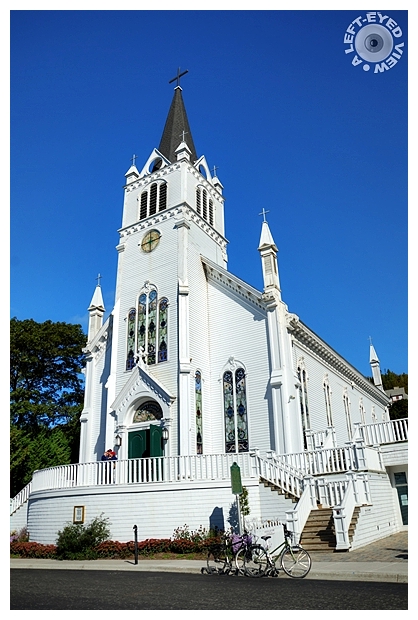 Posted by Steven (Chicagoland, United States) on 14 December 2016 in Architecture and Portfolio.

Sainte Anne Church, commonly called 'Ste. Anne Church' or 'Ste. Anne's Church', is a Roman Catholic church that serves the parish of Sainte Anne de Michilimackinac in Mackinac Island, Michigan. The Jesuit missionary Claude Dablon inaugurated the rites of the Catholic faith on Mackinac Island in 1670, but the earliest surviving parish records list sacraments performed starting in April 1695. After moving from Fort de Buade to Fort Michilimackinac about 1708 and from Fort Michilimackinac to Mackinac Island in 1781, the parish used a historic log church for decades. It constructed the current church complex starting in 1874 on a site donated by the former fur trader, Magdelaine Laframboise.

What a happy and confident church this looks to be !

Your architecture photos are as good as it gets, without being there in person.
From the photo it also looks like the kids like to use it for its vantage point.

Is that timber frame construction? I can spot a lot of horizontal lines. Excellent architecture shot

Brilliant image! The angle and details are superb.

what a beautiful image with that lovely backdrop!

Very beautiful church, and nice shot. It's not easy to take the whole building. Well done.

A majestic viewpoint. I like the way it shines against that blue sky

An excdllent photo of this beautiful church. The history is a fine addition.

A real beauty! I am reminded of a gorgeous old church in Nova Scotia's Acadian shoreline region that is also a historical gem and of wood construction. Fantastic photo of this jewel.

Amazing white church!
Thanks so much for information!!

Excellent detail maintained in the white brightly lit church. THe blue sky might be a bit over-polarized but it provides a drmaatic backdrop. While noticeable, the keyhole distortion is not distracting.

A gorgeous piece of architecture. I like the really nice perspective.

A nice low angle shot makes it quite dramatic.

Beautifully composed and the blue sky gave the perfect contrast for the white church.