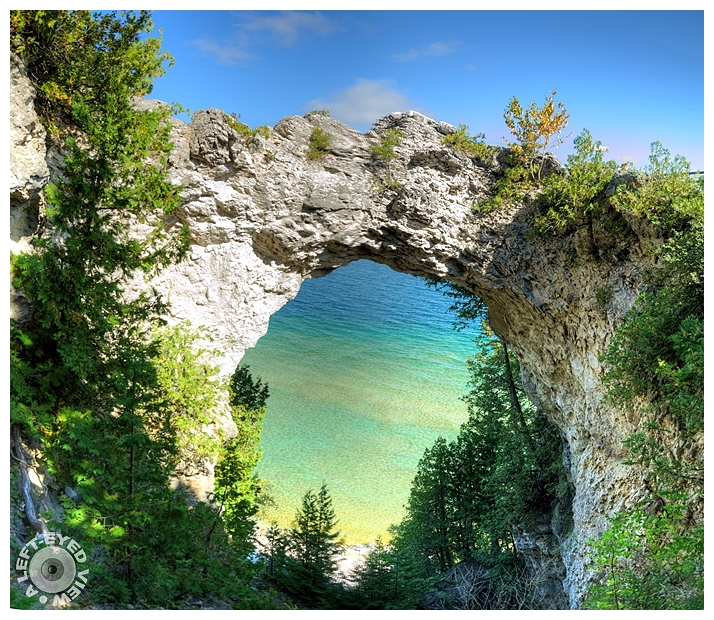 Posted by Steven (Chicagoland, United States) on 22 December 2016 in Landscape & Rural and Portfolio.

Arch Rock is a geologic formation on Mackinac Island in Michigan. It is a natural limestone arch formed during the Nipissing post-glacial period, a period of high Lake Huron levels following the end of the Wisconsin glaciation. To this day Arch Rock stands on the Lake Huron shoreline 146 feet above the water.

Limestone breccia is not an ideal material for natural bridges, and this type of formation is quite rare in the North American Great Lakes region. The Native Americans saw Arch Rock as a place of numinous power, and told many stories and legends about it.

Euro-Americans did not share many of the taboos of their Native predecessors, and treated Arch Rock as a curiosity to be admired. Its presence was a major element in the decisions to create Mackinac National Park in 1875 and its successor, Mackinac Island State Park, in 1895. Arch Rock has been a part of the State Park ever since. Today Arch Rock is a focus of Mackinac Island tourism, and is seen by many visitors to the Island. Several trails and paved roads, including the aptly named Arch Rock Road and Arch Rock Bicycle Trail, lead to the formation.

This is a superb scene Steven. Excellent color, great detail.

A hole in the light...
Merry Christmas!

The color of the water is superb.

@yo: Definitely a resemblance, but your Pont d'Arc has a better panoramic view. This one that I captured above was a hidden formation. I am zoomed out as far as possible and this is how close it was. :-) A reason I had to do a two-shot panoramic.

Wow, great arch and very beautiful color of the sea !

Beautifully done using the arch to separate sky and water

Your usual impeccable framing and crisp detail does this natural gem total justice.

Beautiful colors and luminosity. Despite being a photo taken in October, for me, it is a photo that reminds me the summer.
Well done.

A fine picture of nature's wonder. The history of such an arch is very interesting. Well done.

A beautiful panorama that show off this arch in spectacular fashion.

That is so very nice.

Excellent capture... Reminds me of a rock formation from one I captured in Gozo, Malta. Well done!

Composed to show this off superbly!

What a beautiful scene. Great colours and lovely details. Excellent composition. Love this. :)

Gorgeous capture - a most beautiful location.

Beautiful frame & rock formation.
Merry Christmas & happy Holidays to you and yours !

My parents met on Mackinac Island
Merry christmas to you!