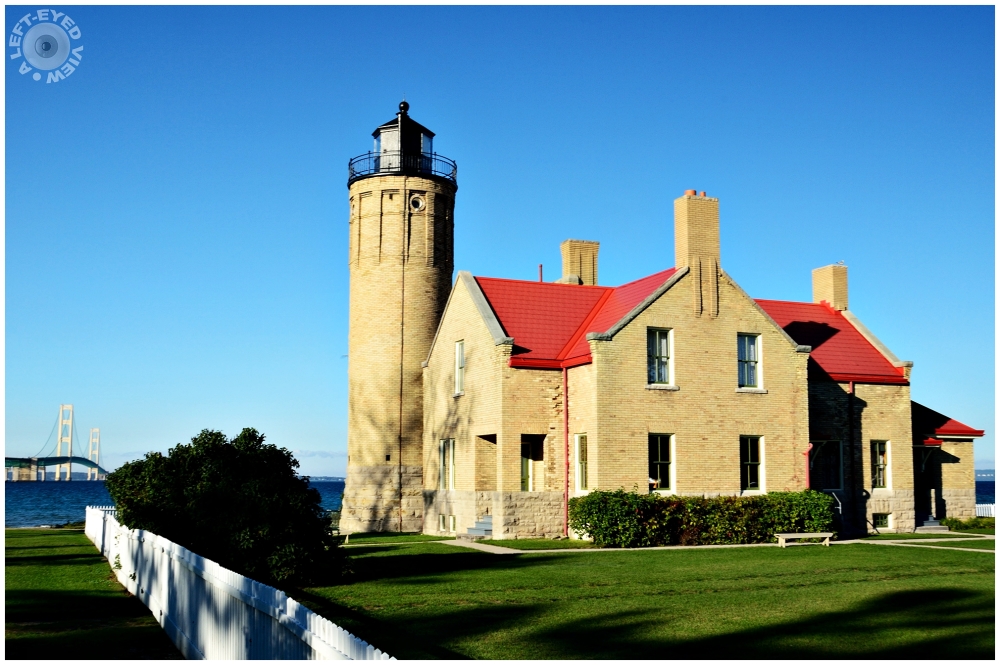 Posted by Steven (Chicagoland, United States) on 10 January 2017 in Architecture and Portfolio.

Old Mackinac Point Lighthouse was built in Mackinaw City, Michigan in 1892 to replace the 1869 McGulpin Point Lighthouse, which was located two miles farther west. A fog signal had been put in place 2 years earlier, in a building which was torn down around 1940 and was recently been reconstructed to house a new Straits of Mackinac Shipwreck Museum.

When in operation, Old Mackinac Point Lighthouse housed the families of the lighthouse keeper and assistant keeper in separate apartments. The families of the keepers assisted with tasks such as hauling oil to the lantern room at the top of the 50' tower. That oil lamp was replaced by an electric light in 1929.

A radio beacon was added to the Old Mackinac Point Lighthouse in 1937. It was installed in the the same building as the fog horn. In the 1930s, the original steam whistles were replaced with air horns which took much less work to maintain.

Each lighthouse in a region is unique, giving navigators more cues as to which navigational aid they are seeing or hearing. Old Mackinac Point Lighthouse was constructed from Indiana limestone, giving it an attractive castle like appearance. The light was a revolving, fourth order Fresnel lens which gave a red flash every ten seconds. The fog whistles also had their own pattern, with a 5 second blast, 17 seconds of silence, another 5 second blast, and 33 seconds of silence, repeated once a minute.

Old Mackinac Point Lighthouse remained in operation until 1957, when the lights on the nearby Mackinac Bridge made the navigational aid no longer necessary. Today the lighthouse is part Mackinac State Historic Parks and is open for tours in from early May through early October.

The great thing about the old architecture, is an awesome thing that lighthouses trying to maintain.

Gorgeous colours and love the Indiana limestone which makes this 'house' a real
beauty, I am glad you got the magnificent bridge in the distance, beautiful !~

Almost like a castle or a manor house, albeit with a 'strange' tower ... ;-)
I like the vivid colours thanks to the gorgeous weather, and the fact that you included the majestic bridge.

This superb building and lighthouse was well worth renovating. It is one of the best lighthouses, I have seen here in the U.S. Excellent image Steven.

A first-class image. well composed with a great subject of protagonist. Nice light too.
Thanks for the explanation too.

It's a beauty, and so is your sunlit photo with this rich green meeting a perfect sky blue.

A very successful shot of the lightouse. The write up adds to the picture.

I love how you composed this with the bridge in the background. The warm light is also lovely

A beautiful old lighthouse. I like the sturdy construction of these structures that has served them so well for so long.

So glad it was renovated.... it's a sturdy looking building! That is a beautiful area that it's situated on and it's cool seeing the bridge in the background too. Very nice!!

That is beautifully shot. A castle in great light.

ah yes... a solid lighthouse nicely photographed with the bridge in the background

And this way, I learned a bit from your story.
Very beautiful composition.