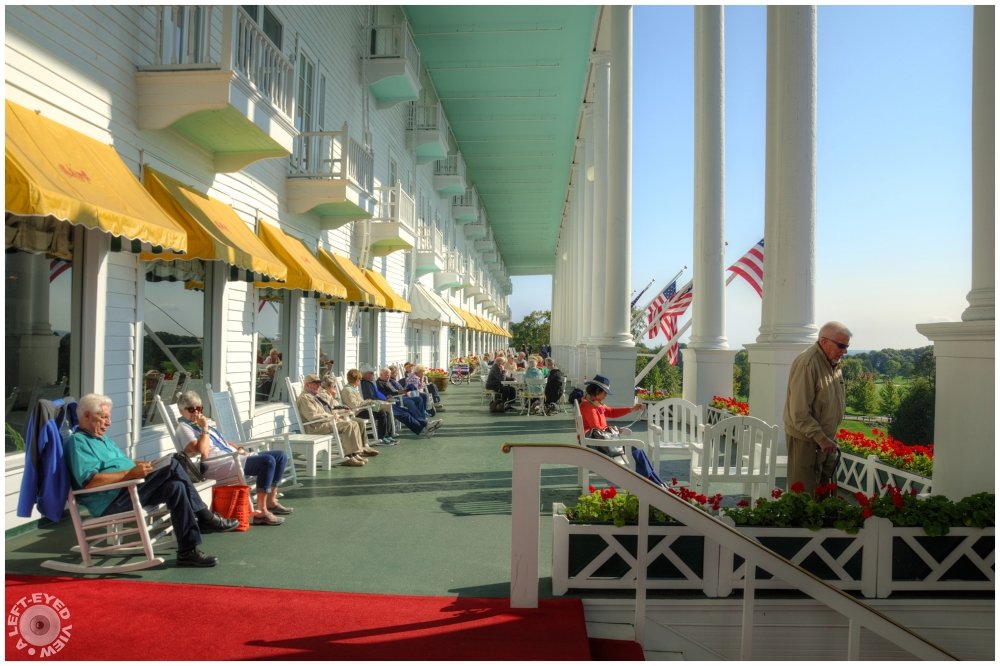 Posted by Steven (Chicagoland, United States) on 19 January 2017 in Sport & Recreation and Portfolio.

This is one half of the Porch that runs the entire length at the Grand Hotel on Mackinac Island. The other half is just as long. The Porch overlooks its beautiful, well-manicured gardens. The first five yellow awnings is where the Parlor is located, while the two white awnings are a secondary entrance into the Main Dining Room, and the remaining yellow awnings are the Main Dining Room. On the opposite side of the porch lie the Parlor and private rooms.

The Grand Hotel is a historic hotel and coastal resort on Mackinac Island, Michigan, a small island located at the eastern end of the Straits of Mackinac within Lake Huron between the state's Upper and Lower Peninsulas. Constructed in the late 19th century, the facility advertises itself as having the world's largest porch. The Grand Hotel is well known for a number of notable visitors, including five U.S. presidents, Russian presidents Vladimir Putin and Dmitry Medvedev, inventor Thomas Edison, and author Mark Twain.

Maybe I have say this early, but it is very finen place to relax

Incredible length which looks almost longer than the titanic liner, a real beauty.
This almost seems a retirement home, do those people live there ?? They all
appear a ripe age.

@Phil Morris: These were the people who were sitting at the end of the porch, then had to sit down and take a breather by the time they arrived here. :-)

Wow !! Great depth in this image. I would not mind spending a few days there

Very nice place, I envy them !

Another great look at this magnificent hotel Steven.

That is one long verandah.... wonderful dof... it reminds me of the lounge chairs lined up on a cruise ship. Lots of seniors here, I think I would fit right in! :) A fine capture of this Grand Hotel... excellent!

Now that is a porch. I like how big it looks and the way it serves the customers. Nice shot.

AN impressive porch. The light and point of view are beautiful

That is a fantastic porch that seems to live up to its billing. Everyone there does seem to be of a certain age.

Excellent again! I can't stop being impressed with the dimensions of this building!

Wow! Sunny weather, paceful place, what else??? :)
So wonderful!

Very nice with the sun.
Have a lovely end of week, Steven.
Yvon.

A magnificent place! I like the atmosphere of relax... Hugs!

A fantastic gallery defined by those impressive columns ... A wonderful place beautifully captured !!! The perspective and light are fabulous ...

I don't see many young people but it does look so inviting.

a lovely place to spend a summer afternoon

Nice and relaxing location. I wish I could relax too... :-)

Beautiful photo, Steven!
Love the depth in it...

Not to be missed! A perspective that does not make me dream but that ensures!

: Helen : from is currently photographing at home in, Australia

This looks so much like what I imagine a traditional hotel in the USA would look like.
It is almost a scene from the movie "The World According to Garp"!

Lovely exterior shot. This series certainly captures the hotel living up to its name :)