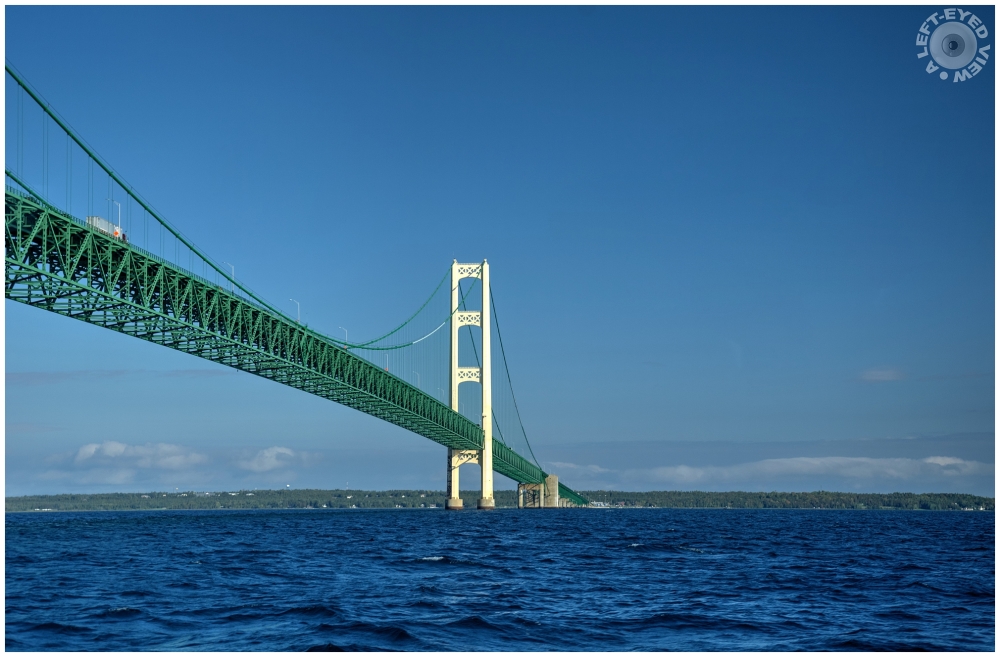 Posted by Steven (Chicagoland, United States) on 23 January 2017 in Transportation and Portfolio.

The Mackinac Bridge is recognized as the official divider between Lake Michigan to the west and Lake Huron to the east.

As opposed to the first photo of the Mackinac Bridge, the weather was much better this day with the sun highlighting the bridge nicely. This view was captured while taking the ferry from Mackinaw City, Michigan to Mackinac Island.

It sure is the most beautiful in your pictures, Steven. The high density colours seem
to swirl in my brain and make for great depth and dimension in your wonderful
photo, the length or span seems almost endless from this persective !

Excellent. The colors are very beauitful.

Nice compo and contrast of colors.

I like how this captures the presence of the bridge in passing . . there is a feeling of Time about it.

Nice shot of this bridge. I have been over it many times.

That is an excellent view taken from the ferry.... you have captured that span very nicely! Beautiful blue sky and water. I like that there were no clouds that might detract from that great shot of the bridge. Very nice!

What a fantastic long range view of this technological feat. Beautiful.

What an aesthetic bridge! I like your pov and composition here.
I also had a look at your previous photo, the black-and-white one, and I really like the mood there.

AN impressive point of view!

Impressive bridge!!!
Thank you for the explanations too!! :)

A wonderful capture of this beautiful and stately bridge.

This is just beautiful! I love the colors of the bridge and the water. A wonderful perspective!

The green goes well with the blue of the water.

A very impressive structure and a beautifully composed image !!! the colors and light are gorgeous ...

Great point of view.
Comparing the two photographs, this one and the first, I choose this one. I think this photo has more dynamism.

Wonderful capture of this beautiful bridge, Excellent perspective and colours. :)