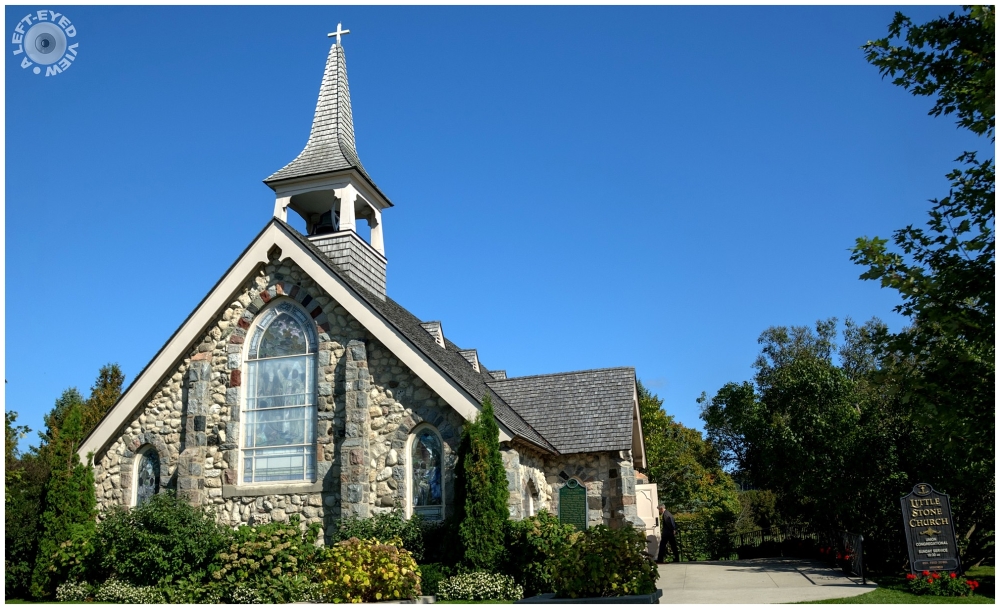 Posted by Steven (Chicagoland, United States) on 30 January 2017 in Miscellaneous and Portfolio.

The Union Congregational Church began with the formation in August 1899 of a congregation known as the Union Church Society. The church structure was built of local fieldstone in 1904 with Deacons S.B. Poole and J.M. Leggett setting the cornerstones of the church.

Asbury W. Buckley of Chicago was the architect and the Koepke Brothers of Petoskey were hired as contractors. Local builder Frank Rounds and his crew gathered glacial-erratic fieldstones to construct the church. The granite cut stones used for the buttresses and courses surrounding windows and the door must have been transported as they are not indigenous to the Island. The 55 by 40 foot interior, featuring gleaming woodwork, and deep-set, colorful memorial windows is virtually unchanged.

Nothing much more beautiful than a church so old, with such beautiful stone
architecture. Stellar view you found, great colour, awesome find, and a great
write-up that I appreciate !~ If you took more I would anxiously await them.

I can feel a sense of welcome even from here . . what a sweet little church.

This is a superb look at this beautiful church. Excellent stonework.

Well this church do justice to its name ! I like a lot !

A beautiful photo of this charming church. The stonework is quite lovely.

One senses the history of worship behind that handsome stone face. Another of your superb blue sky backdrop shots!

An inviting church building. I love the way it looks against the blue of the sky

Thank you very much for your information! A beautiful church and a good composition!

I love this church. The architecture and the stone work is just gorgeous. Wonderful information. I would love to see the inside!

What a charming church, and what an intriguing and interesting background story to go with it.

A beautiful little church superbly captured and a wonderful architecture with fabulous details ...

a cute little church. I like the well-worn river stone used in the construction.

The church is set in a beautiful spot.