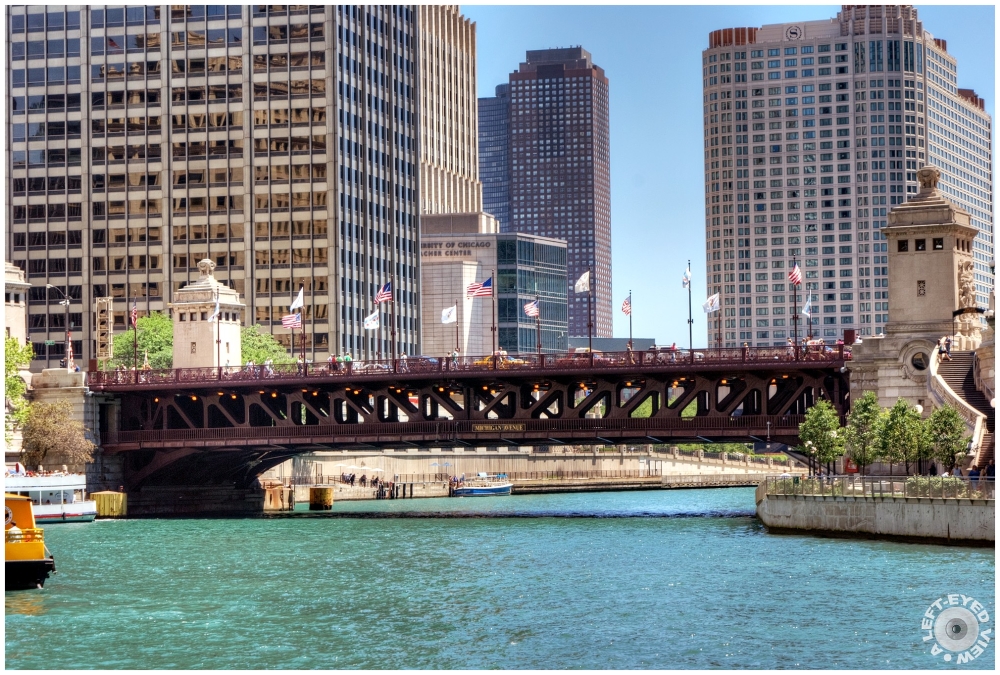 Posted by Steven (Chicagoland, United States) on 9 February 2017 in Cityscape & Urban and Portfolio.

The Michigan Avenue Bridge is a bascule bridge that carries Michigan Avenue across the main stem of the Chicago River. The bridge was constructed between 1918 and 1920 as part of a plan to link Chicago's south side and north side parks with a grand boulevard. It is an early example of a fixed trunnion bascule bridge, which later became widely known as a "Chicago style bascule." It is part of the Michigan–Wacker Historic District and is a Chicago Landmark.

Michigan Avenue Bridge is a double-leaf, double-deck, fixed counterweight, trunnion bascule bridge. It has four bascule leaves such that it functions as two parallel bridges that can be operated independently of one another; at the time of construction bridges in the Chicago River were frequently struck by vessels, and this duplex arrangement allows for leaves damaged in such a collision to be opened for repair without needing to completely close the bridge to traffic. The counterweights are below the level of the lower deck and when the bridge is opened they swing down into 40-foot deep reinforced concrete tailpits that descend 34.5 feet below the surface of the river.

In Spring and Fall, the bridge is raised twice weekly to allow sailboats to pass between Lake Michigan and inland boat yards where they are stored for the winter. Two 108-horsepower motors open and close each of the 3,750-ton bridge leaves.

Handsome bridge and an interesting commentary. It is easy to see that the view is a big city.

I agree with Jypyä Pop. Nice one.

Excellent look at the bridge and buildings Steven. Wonderful color.

You had a beautiful clear day for this photo, everything is so sharp. A lovely composition of the bridge and buildings!

A very good bridge shot with the city high rise buildings behind it. A very successful picture.

I love the flags flying and the lovely light.

It's an elegant bridge with a strong visual presence.
Someday, you have to show us the bridge raised.
;-)

an interesting composition of strong horizontals and verticals

Beautiful composition , colors and this is a superb bridge !

A beautiful image of this iconic bridge. Thanks for the information, too.

Being such an old bridge, the description of its operation is just impressive ... Beautiful cityscape and excellent shot !!!

That shot is very nicely composed.

fine shot of this Chicago landmark.

This is a beautiful bridge. The information is quite interesting. A wonderful view. Beautifully composed image!

Lovely composition with the color of the water in the foreground. I think the bridge has its own beauty despite the rugged industrial design.

An impressive feat of engineering in a fascinating environment! One of the many bridges Chicago is well known for.

A beautiful city scape of Chicago.

that bridge and the water underneath look amazing !!!!!! Thank you for all the information !

I love that bridge. I miss Chicago very much. Can't wait to visit again. I have a very similar image from my last trip there! <3

It's a beauty and looks to have many more decades of service within, too. Superb city shot!