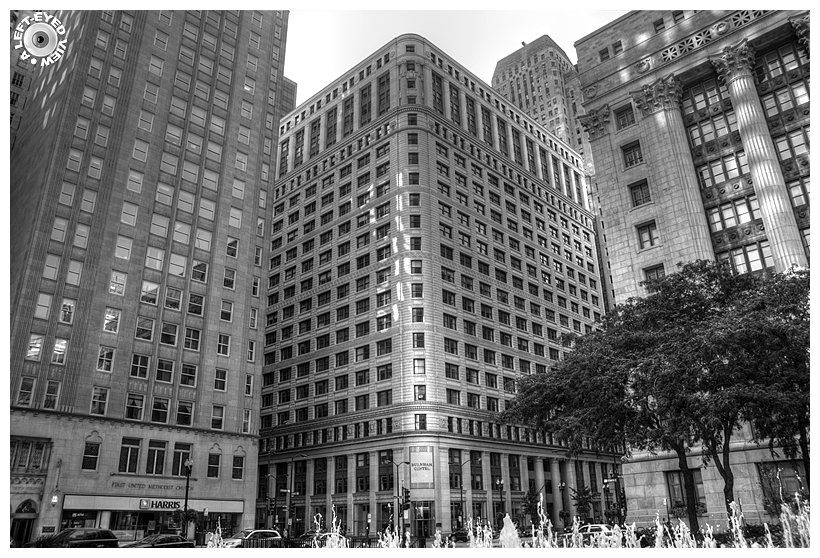 Posted by Steven (Chicagoland, United States) on 10 April 2017 in Cityscape & Urban and Portfolio.

The Burnham Center, originally known as the Conway Building, replaced the Chicago Opera House, which had been built in 1885. The Conway was a real estate project resulting from the estate of Marshall Field, who had died in 1906. Field requested that his $83 million estate be invested in Chicago real estate until his grandson, Marshall Field III, turned fifty (1943). For the most part, Field's estate was invested in existing property, but it was used to fund three major projects: the Conway Building, the Pittsfield Building (1927), and the Field Building (1934).

The building was recognized by the National Park Service with a listing on the National Register of Historic Places on February 9, 1984. The Chicago Title & Trust Co. was a longtime tenet before the 1992 completion of the Chicago Title and Trust Center. Their former headquarters then became known as the Burnham Center.

The Burhnam Center is currently home to the Chicago offices of Grubhub.

What a fine way to turn a corner.

Gorgeous capture Steven, of this architectural photo, and an interesting write-up !
Love the tree languishing in the scene and the silvery sheen on the buildings !~

A really nice look at these buildings. Excellent B/W.

Some impressive architecture here. An excellent and well detailed image.

AN impressive viewpoint. The architecture is a strong presence

Beautiful b&w, perfect for the subject.

I binge-watched Sense8 over the weekend!
Chicago is in my cluster now. :)

Excellent this B/W : bravo.
Have a nice week, Steven.
Yvon.

I like the black and white, and the dappled sunlight, but I find myself lost looking for a subject

Such a beautiful building and awesome image as always, sir!!

Wonderful architecture. A fie shot of this beautiful building. :)

It is a beautiful modern/classic building. And the fact the photo is in black and white, highlighted its lines and forms.
Your archives are worth gold.