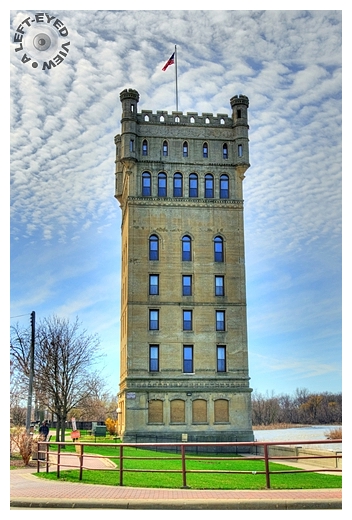 Posted by Steven (Chicagoland, United States) on 31 May 2017 in Architecture and Portfolio.

At the turn of the century, one of Lyons' leading residents, George Hofmann, Jr., dreamed of creating a peaceful area for picnicking and boating. To be an area that would be a source of pleasure and pride for the community. It was to be a special place with a regal tower structure patterned after European castles so that people could enjoy the lovely view from the top.

In 1908, George Hofmann commissioned the H.W. Sauber Construction Company to build his tower from plans imported from Germany on property originally purchased by the Hofmann family in 1874. The tower and dam are located at a ford in the Des Plaines River and an old Indian trail. The dam, built in 1830 in conjunction with a nearby mill, was improved at the time of the tower's construction.

In addition to boat rides and the view from the top of the tower, other activities enjoyed by families were games, contests, concerts and dancing. It was a place to meet friends, drink beer and relax on a summer afternoon.
Pollution of the river brought an end to Hofmann's dream. By 1920, the picnics and boat excursions were discontinued and the once lovely area was deserted. More than the end of a dream, it was the end of an era.

Mr. Hofmann died in 1942, and his heirs sold the tower to the Forest Preserve District of Cook County in 1946. The once noble Hofmann Tower then fell into a state of neglect. The Lyons Historical Commission, realizing the important historical value of the Hofmann Tower, was successful in having the building named a village landmark. Later, in September 1978, it was named a State Landmark, and in December 1978 was listed on the National Register of Historic Places.

The State of Illinois took ownership of the building in 1984 and, thanks to then State Representative Judy Baar Topinka, began its work on the building. The retaining wall which runs parallel to the tower was replaced, the floors in the tower have been reinforced, electricity has been installed, and the building now contains a permanent iron stairway and a new concrete roof. A new door was installed which duplicated the original door and a flagpole was once again placed on the roof so that on Landmark Day in 1988, Old Glory flew once again atop Hofmann Tower for the first time in over 50 years.

In 1989, the Lyons Historical Commission was finally able to move into the building. A museum has been started on the second floor and the interior of the old Lyons Post Office was reconstructed on the fourth floor.

Could be a castle on a giant chessboard :) Nice capture

Excellent look at this tower. Superb color in this image.

Superb image ! He had a great idea !!

Nice with the clouds.

Thank you for sharing this fine piece of architecture..and thank you for the information .. good narration

This stately tower has a long and interesting history. I enjoy your beautiful photo of it.

A stunning image. the color and light are superb.

Those graduated blues in the windows are really eye catching - good work!

An exquisite image of a noble tower!

That is so cool.

nice shot. I drove by that tower many times during my high school years but learned more of its history today

This is a gorgeous tower and wonderful piece of architecture. Mr. Hofmann had a wonderful vision. I love how it was fashioned after the castles in Europe. It was sort of a sad ending to the tower and his dream but am glad that the tower has been restored. It is beautiful!

Beautiful architecture. And a fine shot. :)

No doubt this tower resembles the towers of the medieval castles.
It's a beautiful tower and the photo was well taken.