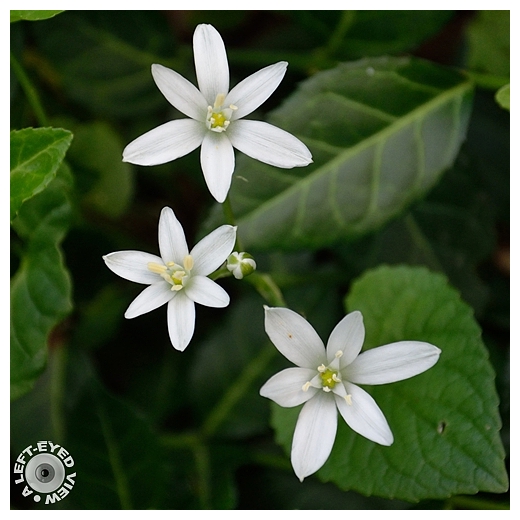 Posted by Steven (Chicagoland, United States) on 13 June 2017 in Plant & Nature and Portfolio.

Ornithogalum is a genus of perennial plants mostly native to southern Europe and southern Africa belonging to the family Asparagaceae. There are some species native to other areas such as the Caucasus. Growing from a bulb, species have linear basal leaves and a slender stalk, up to 30 cm or more tall, bearing clusters of typically white star-shaped flowers, often striped with green. The common name of the genus, Star of Bethlehem, is based on its star-shaped flowers, after the Star of Bethlehem that appeared in the Biblical account of the birth of Jesus.

A wonderful look at these flowers, and great to read about them.

Beautiful floral trio.
The photo has excellent light control and the level of detail is perfect.

So beautiful. Love these flowers. Great in the dark background. A fine shot. :)

An excellent capture of the lovely white stars floating above the field of dark green.

My friend Graciel·la speaks of the many names of this wonderful flower. My daughter is called Betlem ... she will like to know this white flower! Thanks a lot!

What a lovely name and story. They certainly shine against the green leaves. Beautiful macro.

That is a lovely shot.

lovely, Well framed with plenty of attractive greenery around the blooms

I always love white flowers against the green leaves. This is just beautiful! A gorgeous image!

So delicate looking! Thank you for the info - I always like to have more info on botanicals!