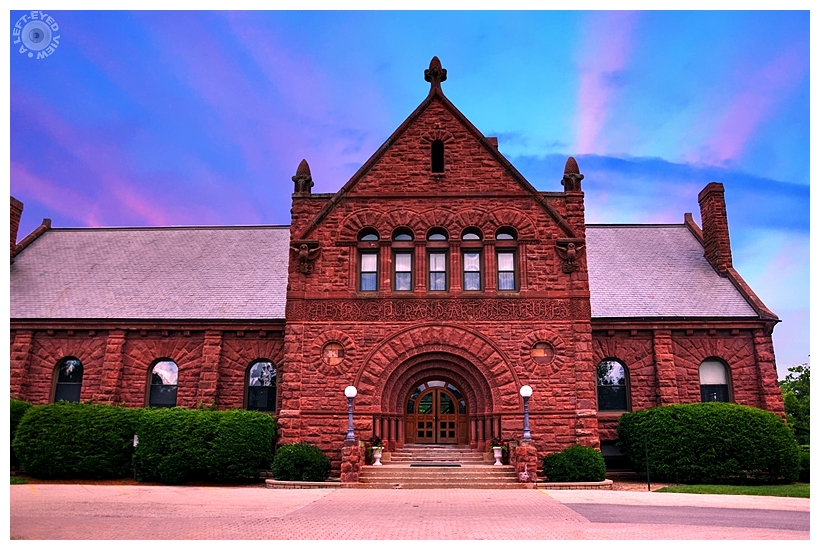 Posted by Steven (Chicagoland, United States) on 11 July 2017 in Architecture and Portfolio.

Durand Art Institute, built as the Lake Forest Art Institute Club, has been described by architectural historians as a “stunning” version of the Richardsonian Romanesque architectural style. Durand’s front facade faces the First Presbyterian Church, at the request of its pastor, Reverend McClure, who became president of the College in 1897. From the corner of Deerpath and Sheridan Roads, Durand looks much as it did when it was completed in 1892. Although its steeply pitched gable roof is now made of gray slate, replacing its original red, Durand still links the College campus with the community.

Looking like a cross between a medieval church and a castle, Durand is constructed of red sandstone, the large blocks roughly finished in a way that suggests great age. The round recesses filled with sandstone and limestone blocks romantically suggest the façade evolved and changed over the centuries. All this, along with the arched windows, the finials on the roof, and the battered buttresses, recall Romanesque church architecture. But this is a temple of art, originally designed like the Art Institute of Chicago completed the same year, to combine an art exhibition space with a large auditorium.

The recessed main entrance is a work of art in itself. Its red sandstone arches gradually get smaller, drawing one’s eyes to the focal point of the door. Notice above the main entrance the owls (symbols of wisdom) standing upon paintbrushes and palettes, symbolizing the combinations of scholarship and art. Above the arches, the name of the primary donor, wholesale grocery magnate Henry C. Durand, is engraved in letters intertwined with leaves and pinecones in a style reminiscent of medieval manuscripts.

“Durant” in French means “during," and the family’s adopted motto (featured on a needlepoint family crest hanging in one of the classrooms) is “Endurant j’espère," or “Enduring, I hope." Hopes to endure have been realized by this building, which has played an active role in college and town life since 1892.

A superb building and your photo is beautiful !

A great building. And a great picture, and nice info. Thanks. I like a lot.

Beautifully documented in picture and words. The perspective created by the multiple arches is worth a shot in itself

Solid and impressive building. I like the pinkish light streaks.

Very beautiful building ! And the sky is beautiful !

This is just magnificent. The red sandstone is superb. Excellent information on this image Steven 5*.

Beautiful rich tones and lovely view against the blue sky

An impressive bluilding for its style and great color. So rich and attractive.

A very interesting reading. Thank you very much ! The exquisite image...

The photo has a spectacular color and the building is really remarkable.

A beautiful image of this great building. The sky and red stone look so pleasing to the eye. Love that grand doorway.

Richardsonian Romanesque? That's new to me!
But the sky stole the show ;)
The pink and blue are electrifying!

This is one of the most beautiful buildings I have ever seen. I love the arches at the entryway. The stone work of the entire building is just spectacular. I love the color of the sandstone. Beautifully photographed with the gorgeous color in the sky! 5*****

Beautiful image of this building. Excellent. :)

Beautifu colors and detail and, as always, a magnificent narrative ;-)

A fine edifice Steven... :)
I wonder if anyone's done an HDR capture of this and then tonemapped with the Durand algorithm... :)