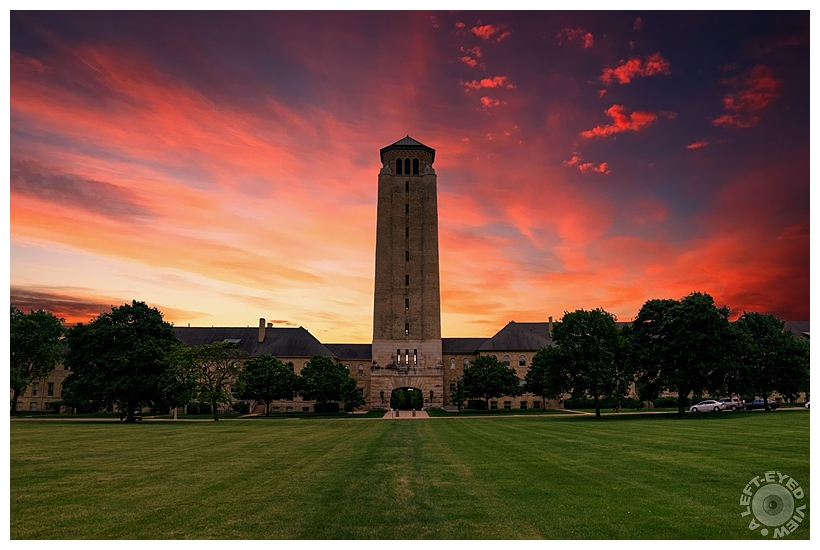 Posted by Steven (Chicagoland, United States) on 13 July 2017 in Architecture and Portfolio.

Great set. The red sky in the background brings the drama to the picture.

a beautiful capture with great shadow detail and lovely tints

This is just magnificent. The light and color are superb. A fabulous image. 5*

Oh ! superb with this sky

An amazing sky here. The tower is quite beautiful, too. I remember seeing it on your blog some years ago.

Wonderful colors and luminosity. The tower is clearly a landmark in the landscape.

What a spectacular sky as a backdrop to this commanding tower.

A careful exposure to get the tower and that spectacular sky together. Fine shooting.

A splendid image. Thanks so much for the explanation...

Thank you for all the info.
With that dramatic sky, the tower looks imposing..
ehem..a bit scary too!!!

Amazing sky! The colors are gorgeous!

Wow that sky is amazing, Steven!!! Even without it though, your composition is great. Thanks for the background - I like knowing the history of things!!

Absolutely superb photography and narration, Steven....as always ;-) Your work is really inspirational! I know I am in and out - here and there - and absent quite a lot, but whenever I make a "trip back" to see what's up on AM3, your work always brings a smile and a Good bt of education...I love the colors here, too...gorgeous!!

Absolutely gorgeous. The water tower is so majestic. The sky is spectacular! It reminds me of an old water tower in Baltimore, Maryland. It is sort of similar. These towers are just so beautiful as compared to the round steel structures used today. This is a beautiful image! 5*****

Great monument and what a sky!

I love water towers like this, which we see all over Europe, Steven, each one different and with its own personality. But in America??? I didn't know such a thing existed there! WOW.

Congratulations. This was a cert for a Spotlight. Magnificent.

Lovely sky and a charming frame

That is absolutely glorious with that sky.

Congrats Steven for this Spotlight

splendid! can feel the breeze in my face

Congratulations on your SPOTLIGHT! I knew it was worth 5 stars!!!

and Congratulations on your Spotlight !

That's a very tall one! Never seen one so tall like this in England, not yet at least!
The sky is mesmerising.

Great capture of the magnificent architecture. The sky is very beautiful and dramatic.

Stunning capture Steven! The clouds are lovely too! And it's a nice piece of history there... :)

Beautiful capture of the historic landmark water tower. Excellent.
Congratulations on your spotlight. :)

Congrats on your great picture.

Congratulations on your SPOTLIGHT!

this is an awesome piture, incredible lighrs!