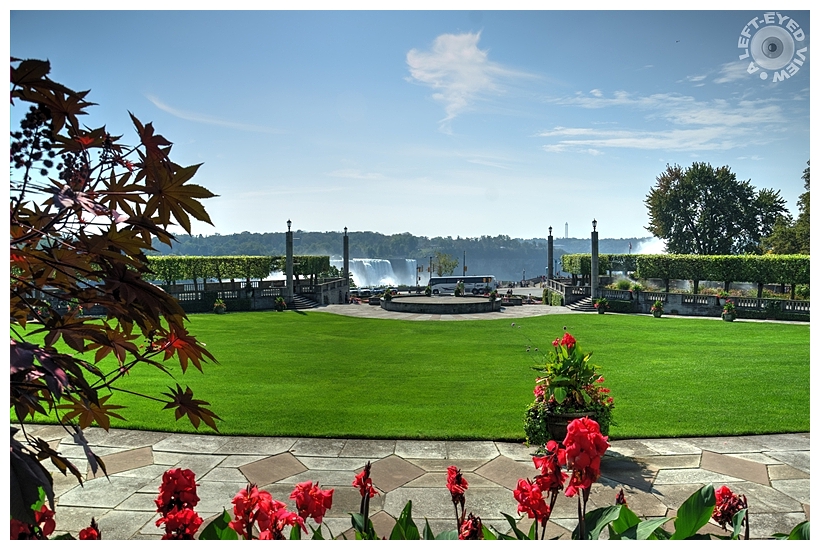 Posted by Steven (Chicagoland, United States) on 17 October 2017 in Landscape & Rural and Portfolio.

Oakes Garden Theatre stands as one of the finest examples of designed landscaped beauty, showcasing Canadian art, architecture and craftsmanship and serves as a dramatic gateway into Canada.

This view is taken from the back of the theatre (along the arcade) and looking toward the intersection of Clifton Hill and Niagara Parkway. In the background, you can see the American Falls, one of three Falls that make up Niagara Falls.

Wow, amazing that the fall is over the parc level

Don't quite know how I missed you yesterday, a lovely crisp architecture shot and here today the magical viewpoint for the falls beyond. No shortage of water for the lawn here :)

wonderful image..I love the falls behind! The lawn looks amazingly even and beautiful!

OH my goodness! Seeing the falls in the background is amazing. Fantastic image.

Spot-on composition here. The expanse of green opens up to the famous view, very nicely.

This is a very nice place. I like a lot.

Now, please, indulge me for a second.
Yesterday was a sad day.(another sad day)
Forgive me for being so bold, (Trust, the foundation of friendship, you know it) but I have a news story that I think you should know. Please watch this video. For me is important. We need you to know the problem. This must be solved. Sorry to barge in like this, but right now I need my friends. Thank you so much.

A turf that invites to a play.
:-)
The presence of the waterfalls in the background, really turns this space as an excellent platform to see the waterfalls.

A beautiful place. What a view of the falls from there.

What a beautiful place. Wonderful view of the falls. Excellent. :)

Very nice with that glimpse of the falls in the distance.

A gorgeous image. I love seeing the falls in the distance. I visited there on a trip to Toronto a few years ago. To see the falls in person was just amazing.

Very pretty. They have sure dressed it up since I was there years ago.