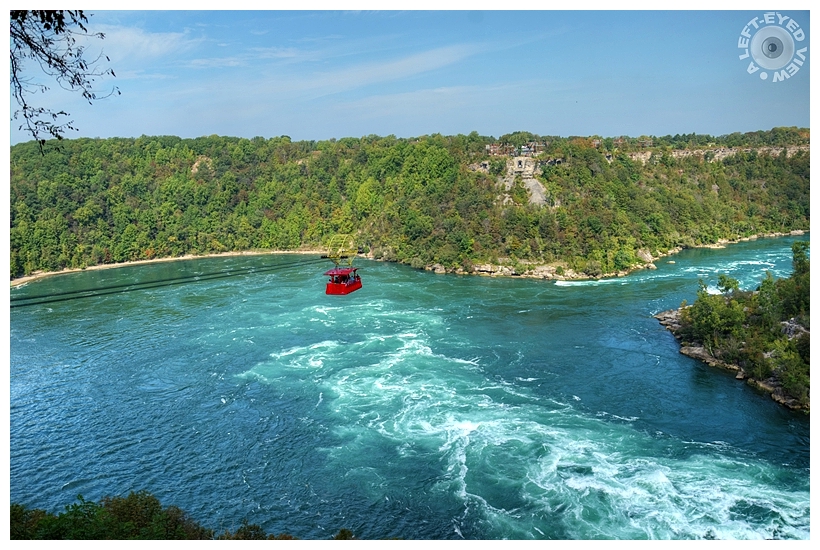 Posted by Steven (Chicagoland, United States) on 23 October 2017 in Transportation and Portfolio.

The Whirlpool Aero Car or Spanish Aero Car is a cable car located in Niagara Falls, Ontario that transports passengers over a section of the Niagara River referred to as the Niagara Whirlpool. The system was designed by Spanish engineer Leonardo Torres Quevedo and has been upgraded several times since 1916. The system uses one car that carries 35 standing passengers over a one-kilometer trip.

The Aero Car is suspended on six interlocking steel cables, each of which is 25 mm (0.98 in) in diameter. The car is powered by an electric 50 horsepower (37 kW) motor and travels at approximately 7 km/h (4.3 mph). In the event of a power failure, a diesel engine drives a hydraulic pump to pull the carrier back to the loading/unloading terminal.

The Aero Car is suspended between two Canadian points, though it crosses the Canadian and American borders four times on a full trip. The car crosses the border about 500 feet (150 m) from the starting point and runs through United States territory for about 200 feet (61 m), but riders need no immigration clearance. At each end of the crossing, it is 240 feet (73 m) high, and in the centre, it is 200 feet (61 m) above the river. Its span is 1,770 feet (540 m). The rapids entering the whirlpool below the Aero Car move at an estimated 35 to 37 km/h (22 to 23 mph), and the flow of the water coming through the river is about 2,800 cubic meters per second (623,000 imperial gallons per second) in the summer months. From the Aero Car, sightseers can see Whirlpool State Park in Niagara Falls, New York, as well as the Robert Moses Niagara Hydroelectric Power Station in Lewiston, New York. From the side or centre of the car, one can view the violent motion of the 60 acres (0.24 km2) whirlpool below. Riders may also see hikers on nature trails and fishermen on both sides of the river.

I think my courage would fail me here . .

Must be a great experience. Do you try it ?

I agree with Evelyne: must be a great experience. This is an impressive shot .

A dramatic and wonderfully detailed frame. This is a clear example of humanity's ingenuity and courage.

WOW! A gorgeous image, but I am not sure I would be able to ride on this!

It looks like quite the dramatic ride over the whirlpool. The colors down there are beautiful.

I think my vertigo would not allow me to walk in this transport system. Even more, it looks like the car is open and has no glass.
:-)
It is a trip for those who do not suffer from vertigo.

Great. That would be an amazing ride.

I am not sure that I would want to ride in it! It looks a little scary being suspended over all of that water! But I am sure that the views would be spectacular! Gorgeous color!

the perspective makes it confusing whether the red car is in or above the water.

This looks live a fun way to see the view.

Amazing. What a beautiful shot. Excellent. :)

Oooh that would be fun! Nicely captured!

Rather them than me :) Another great falls shot