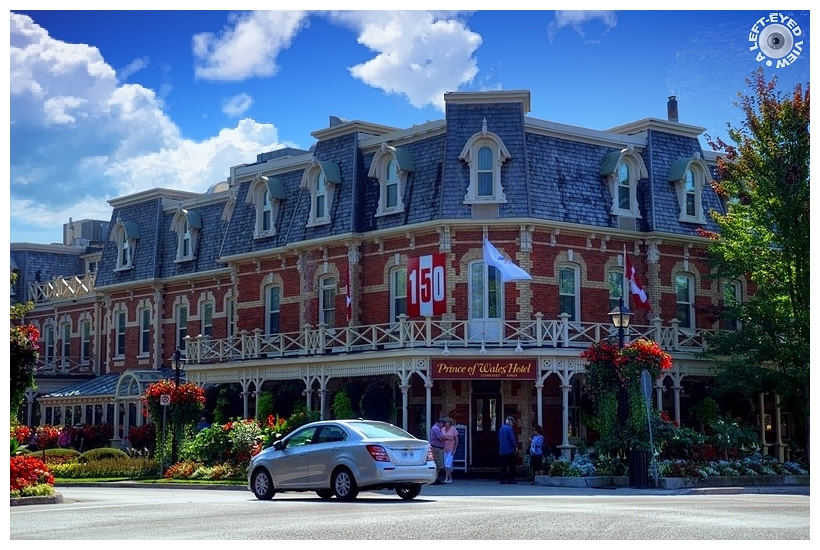 Posted by Steven (Chicagoland, United States) on 14 November 2017 in Business & Industry and Portfolio.

Built in 1864, the three storey 110-room hotel went by several names (Long's Hotel, Arcade Hotel, The Niagara House) and was renamed with the current name in 1901 after royal guests The Duke and Duchess of Cornwall and York (afterwards known as The Prince and Princess of Wales until 1910) stayed. Queen Elizabeth II stayed at the hotel during her visit to the area in 1973.

A cozy looking place. The house and its surroundings are great looking.

amazing that it stands so majestic since 1864..
So many of the Royal Families have stayed here too !

Superb framing of this beautiful hôtel !

You framed this gem perfectly. I'm looking forward to more of your visual take on this heavily touristed but pretty Ontario town. (when I was there last, alas no camera on my person)

I love this viewpoint to appreciate the beautiful architecture.

A fine job of exposing to get the backlit building so well. A fine picture of this historic hotel. A very interesting history.

This looks like one of the places I would want to stay but might not be able to afford to. ;-) Cool.

Hopely is this Hotel also inside beautiful .
Wonderful image !

Nice photo. I like the sharpness and the colours. but I wish you had waited until the car had driven out of the frame. Perhaps it was parked there.

@Blikvanger: This is located on a very busy street and I waited for a moment that provided the least amount of obstruction by cars.

A very well preserved old place. I like seeing all the well tended plants everywhere.

That is a very interesting looking building. Nicely shot, Steven.

It is a beautiful building. I like the architecture. It has quite a history and it is in pristine condition. A gorgeous image!

Beautiful shot, Steven! I remember this building - your image is wonderful!

Fit for a queen!

Fancy... With 150 years of history and yet the hotel has been able to reinvent itself to the new times. Essentially it has gone through 2 centuries of fashions, safety standards and etiquette.