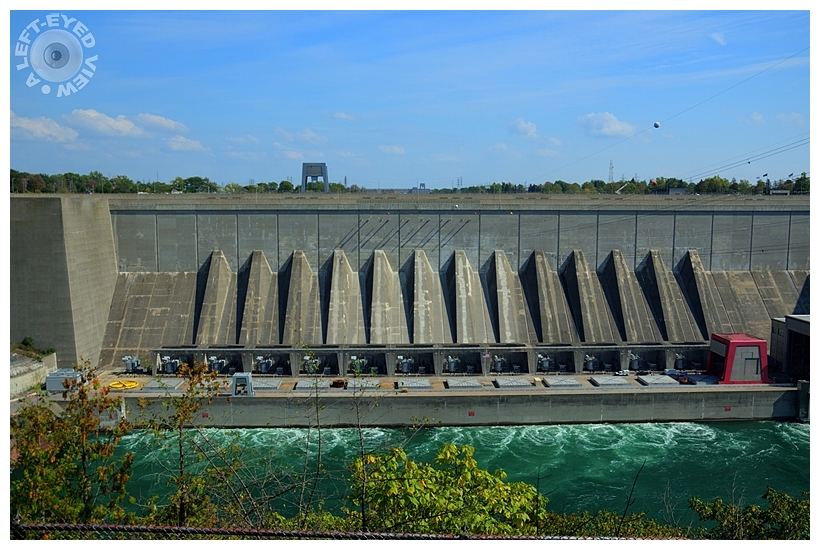 Posted by Steven (Chicagoland, United States) on 22 November 2017 in Business & Industry and Portfolio.

The Robert Moses Niagara Hydroelectric Power Station is a hydroelectric power station in Lewiston, New York, near Niagara Falls. Owned and operated by the New York Power Authority (NYPA), the plant diverts water from the Niagara River above Niagara Falls and returns the water into the lower portion of the river near Lake Ontario. It uses 13 generators at an installed capacity of 2,525 megawatts (3,386,000 hp).

Named for New York city planner Robert Moses, the plant was built to replace power production after a nearby hydroelectric plant collapsed in 1956. It stands across the river from Sir Adam Beck Hydroelectric Power Stations in Ontario, Canada. During construction, over 12 million cubic yards of rock were excavated and twenty workers died. Construction was complete in 1961. When it opened in 1961, it was the Western world's largest hydropower facility. The generation facilities were listed on the National Register of Historic Places in 2017.

Handsome institution. Hydropower has also been built heavily in Finland in the early 20th century as the need for energy increased with the development of the industry. The biggest pieces in Finland are the Imatrankoski and Kemijoki plants.

Though I grew up in Michigan not far from this place, Steven, I briefly visited only the Lower Falls once and never saw everything else you've been posting these last days. So much history to learn from this one spot.

What a fine story
And good to see the surroundings

Hydroelectricity still has a huge potential to develop even further.
Since it's free, clean and renewable.

AN impressive point of view

A very fine image of this power harnessing plant.

A fine picture of this power plant and a very interesting comment about it. Very well done.

Impressive engineering work. Thanks for the info.

Some are in favor of hydroelectric dams, others are against. But no doubt that between polluting the atmosphere with the burning of coal or oil and the generation of energy by a hydroelectric dam, the second alternative is much better.
It is an imposing dam.

A beautiful image of this massive structure. It's output is still impressive.

A superb view point !
And story

A wonderful view and great narrative history. It is hard to believe that so many workers lost their lives while this was being built. Sometimes I feel like we don't think of how dangerous these jobs are.

A nice bit of documentary work.

Impressive power plant and it's story.

I can almost hear it humming. Nice shot of this massive structure.

Good photo of the structure.
I like the colors,too.

Nice capture. Thanks for sharing.