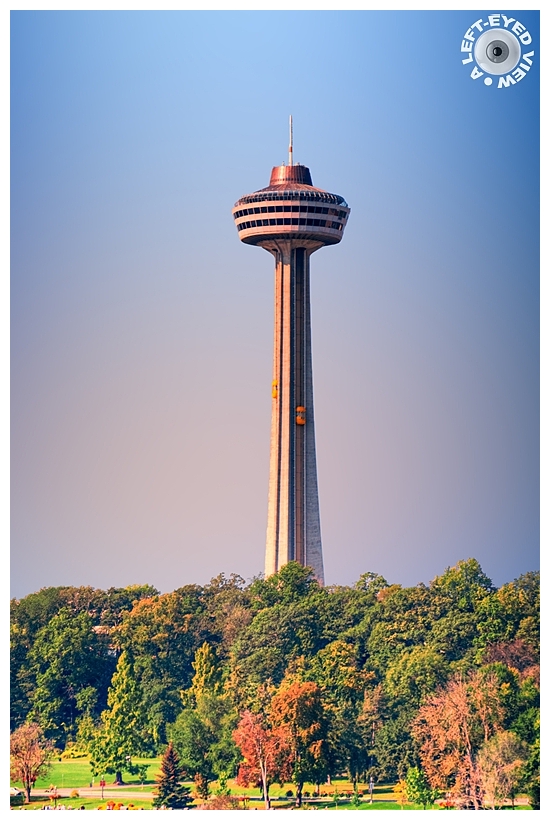 Posted by Steven (Chicagoland, United States) on 11 December 2017 in Architecture and Portfolio.

Standing at 520 feet from street level and 775 feet from the bottom of Niagara Falls, the tower required approval from both Canadian and United States air transport authorities, due to its proximity to the international boundary. It was the second tower to be built using the slipform method, in which concrete is continually poured into a form moving slowly up the tower. It was built by Pigott Construction of Hamilton, Ontario. The same methods were also used to build the Inco Superstack in Sudbury, and the CN Tower in Toronto.

The tower features three outside mounted "Yellow Bug" elevators (two of which can be seen above). At the time of their construction they were the first such elevators in Canada. They were designed, engineered and maintained by a division of the Otis Elevator Company from Hamilton, Ontario and can carry passengers to the top of the tower in 52 seconds. Unlike conventional elevators that are guided by side rails, the Skylon elevators operate with a guide rail on the backside only. Special equipment is employed to prevent the cables from becoming tangled in the wind or impeded by snow and ice in the winter. A curtain wall on the outside of the tower behind each elevator protects the counterweight and traveling cables from the elements.

The tower has two restaurants at its top, the lower Revolving Dining Room and the upper Summit Suite Buffet. The Revolving Dining Room seats 276 people and revolves once every hour by resting on a circular rail that is propelled by a 3 horsepower motor. An observation deck sits at the tower's summit. The base of the tower features a number of gift shops, fast food restaurants and a large amusement arcade. A floor for conventions is also available, but is seldom utilized.

Wowser. A total "must" and no-brained if you're there!

The top was probably inspired by a curling stone! or a hockey puck?! ;)

SUperb! The light and color are stunning

A nice Autumnal composition for this locally famous tower. Excellent.

I would love to ride those elevators and take in the view from them. Wonderful shot.

Good information for a beautiful image. I like it...

very cool processing for this

A beautiful capture of this handsome tower. Nice light on the tower and trees.

A beautiful image. That was very interesting reading about how the tower was built. I had never heard of that method before. I am not sure that I would want to travel up there on those outside elevators!

Beautiful image of the this great tower. Excellent. :)

In Tampere, in Särkänniemi, there is a tower called "Näisinneula", whose rocks from the ground to the top of the antenna are 168 meters. It has a rotating restaurant at an altitude of 124 meters. Behind the restaurant is an open observation deck. Such towers are the masterpiece of the builders. In the tower of Tampere, the lifts are inside the tower from the elevator on the outskirts, it is great to watch when the views are expanding.

has a wonderful Sci Fi quality to it

Oh I'd love to go there! Ride all the way to the top! Your photo is love - with some golden light and golden leaves!