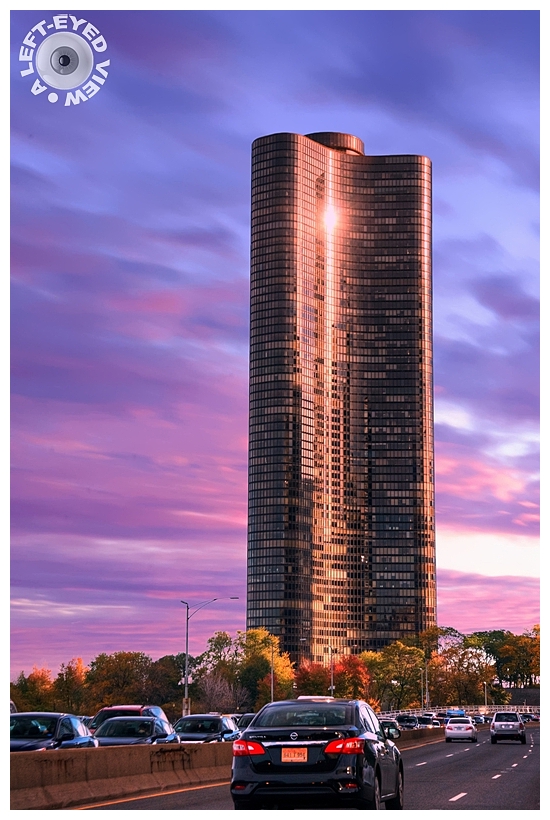 Posted by Steven (Chicagoland, United States) on 18 December 2017 in Architecture and Portfolio.

Because of its height and lakeside site, the skyscraper had to be designed to withstand high winds. At the center of the building is a triangular core, 59 feet wide, that contains nine elevators and three stairwells. This core holds all of the vertical weight of the building, allowing the perimeter pillars on the facade to be much smaller.

Radiating from the core are three arms that form an asymmetrical Y-shaped floor plan. The original four-armed design was changed to a three-armed design (120° apart). The outer walls are curved to prevent residents from seeing into other condominiums. The façade of the building is a curtain of bronze-tinted glass framed by gold-anodized aluminum, which reflects the sunlight off of Lake Michigan and looks golden.

Impressive and beautiful tower. I like colors of the sky

Wowser! Lots of good information for this architectural beauty.

Beautiful capture, i like the colors in the sky.

It's a beauty, and so is the portrait you made. Excellent image and details in the write up.

A beautiful image of this spectacular tower. A lot of thought went into its design.

That really is impressive .... I can't even imagine living on the top floor of this structure. I wonder how much one of the condos go for? It is amazing!!

That is such a spectacular building and a brilliant piece of architecture. I love the shape. A gorgeous image as it gleams in the sunlight. Wonderful narrative information.

It sure does make a statement. Dominating.

lovely subtle colors behind the skyscraper

Such a beautiful building - and I love your photo - with the pinky / purple sky and the sun's reflection!

The architect who designed this house was definitely thinking of a bottle that suits even the pocket.

A design inspired by fidget spinners?!
Ha ha.. They already had such gadget back then!