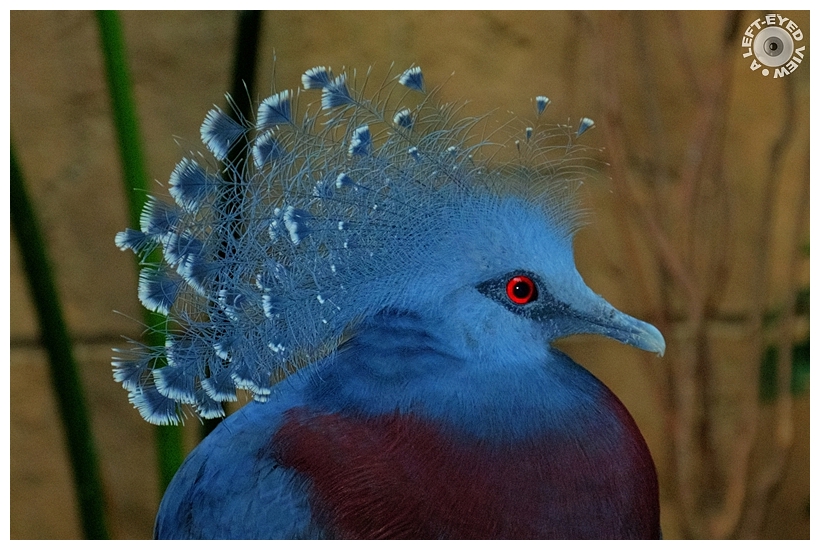 Posted by Steven (Chicagoland, United States) on 3 January 2018 in Animal & Insect and Portfolio.

The Victoria crowned pigeon (Goura victoria) is a large, bluish-grey pigeon with elegant blue lace-like crests, maroon breast, and red irises. It is part of a genus of three unique, very large, ground-dwelling pigeons native to the New Guinea region. The bird may be easily recognized by the unique white tips on its crests and by its deep 'whooping' sounds made while calling. Its name commemorates the British monarch Queen Victoria.

A new one to me . . very impressive pigeon !

He his really splendid. Wonderful colors and portrait

what a marvellous mohican :)

wow !! A fantastic image of this stunning bird :)))

Did you see any tragopans there?

I really like the detail and color. Amazing plumage.

A wonderful avian portrait, Steven! Excellent focus, bokeh and light management that bring out the beauty of this exotic bird!

5 stars from me. I saw one of these beautiful birds at a zoo a while back, but it moved too quickly for me to get anything near a good shot. This is stunning

A gorgeous capture of the feather details and the rich colors. Excellent.

A brilliant capture of this spectacular bird.

The red of the eyes, it gains immense prominence in the set of the blue of the feathers.
Wonderful crown.

This one is very special
Beautiful colors

A nice bleu crow .
Its a beauty

Woww I never seen anithing like this!! Awesome portrait of this pigeon! SUPERB!!!!5*****

That is a stunning bird. So beautiful. Very nicely shot as well.

What a gorgeous bird! The colors are just beautiful! I just love the feathers on his head and those red eyes! A stunning portrait that you captured! 5*

a beautiful bird photographed against a well selected background