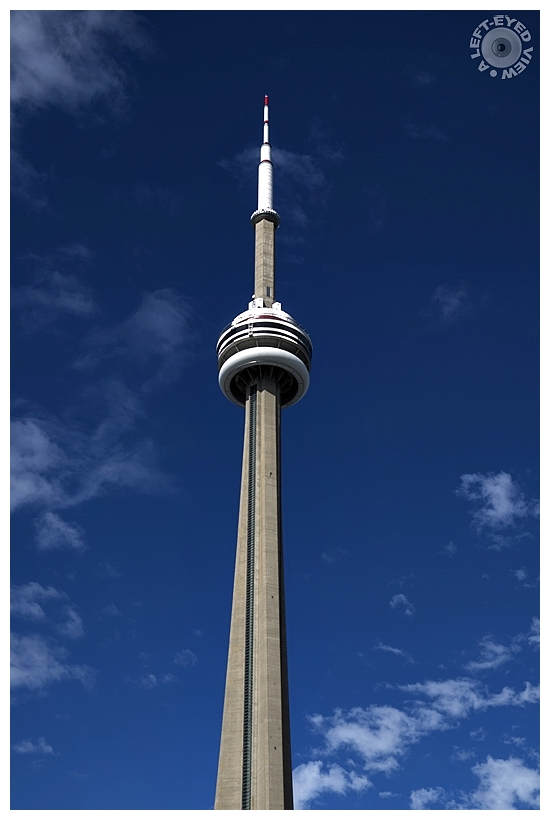 Posted by Steven (Chicagoland, United States) on 15 January 2018 in Architecture and Portfolio.

The CN Tower is a concrete communications and observation tower that rises 1,815.3 feet in downtown Toronto, Ontario, Canada. Built on the former Railway Lands, it was completed in 1976, and held the record for the world's tallest free-standing structure for 32 years from 1975–2007 and was the world's tallest tower until 2009 being overtaken by Burj Khalifa and Canton Tower, respectively. It is now the third tallest tower in the world and remains the tallest free-standing structure in the Western Hemisphere, a signature icon of Toronto's skyline.

Its name "CN" originally referred to Canadian National, the railway company that built the tower. Following the railway's decision to divest non-core freight railway assets prior to the company's privatization in 1995, it transferred the tower to the Canada Lands Company, a federal Crown corporation responsible for real estate development.

In 1995, the CN Tower was declared one of the modern Seven Wonders of the World by the American Society of Civil Engineers. It also belongs to the World Federation of Great Towers.

Excellent framing. I like the design - by architect John Andrews - who also designed a number of public buildings in Canberra and other Australian cities.

Cool shape of the tower !

It looks much better than London's BT Tower. :)

What a high !!!
Nicely contrasting with the blue

Beautiful against that deep blue background.

A classic view with a wonderful blue sky to show it off. I love seeing my city through the eyes of other photographers. As a boy, I watched this being built and particularly enjoyed the topping off day when a massive Sikorski helicopter lifted the three hundred foot long mast into place. This has a 200 year lifespan and one can only surmise at what the city skyline will look like by then.

A magnificent image! It is amazing how it stands there being so tall. I can see why it is considered an engineering wonder. Fabulous narrative information.

That is excellent. So crisp with great colour that makes the tower jump out.

gorgeous sky split by the tower

A beautiful image of this needle piercing the sky.

The world's tallest tower ,since 2011, is the Tokyo Skytree at 634 m followed by the Canton Tower at 600 m, and the CN Tower at 553.33 m. This is according to the rather confusing Wikipedia groupings of tall structures. The Burj Khalifa is definitely tallest freestanding structure on land at 829.8 m.

Increasingly, the towers are part of the landscapes of our cities, and this is one of the most elegant and beautiful.
The well-marked blue sky gave the photo a special touch.