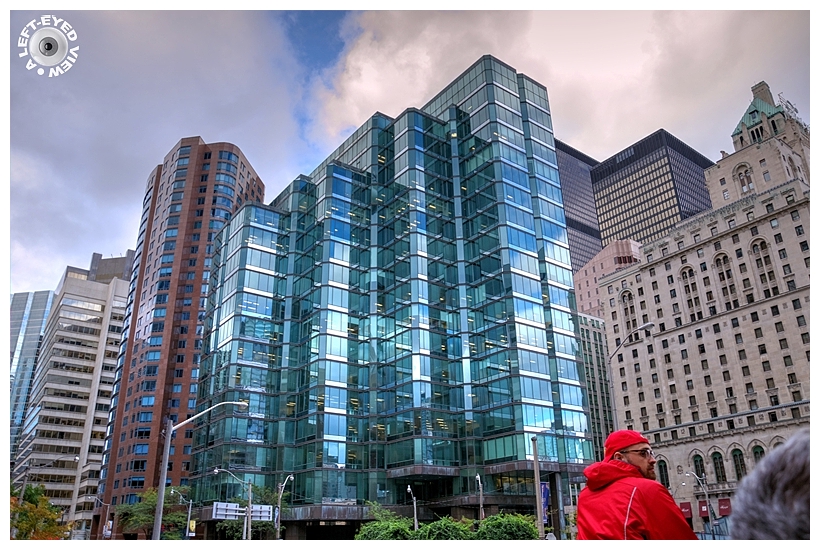 Posted by Steven (Chicagoland, United States) on 22 January 2018 in Architecture and Portfolio.

One University Avenue, completed in 1986 as Metropolitan Place, is one of the few distinguished towers from that period. Working within the late-modern idiom and typical developer constraints, the Toronto firm of Brisbin Brook Beynon created an inventive, well-crafted building and an engaging urban realm at one of the city’s primary gateways.

One University is notable first for its response to its site, a small but prominent triangle of land adjacent to the limestone monoliths of Union Station and the Royal York Hotel. The 19-story tower’s massing follows the triangular site, its vertical ziggurat profile progressively staggered inward to form a blunt prow overlooking Front Street. Structural modules are articulated as individual units, the edges elegantly chamfered, and are wrapped in a sleek blue-green glass membrane that effectively de-materializes the tower’s bulk.

I absolutely love it, Steven. WOW. You did a great job of capturing it.

Reflections are superb and colors also. I love it!

A very different view from the top of your touristic bus than when we walk down the street ! excellent !

A great capture here !! I just love this !

A fine cluster and study in contrasts, and I agree with the write-up that this is one of a handful of buildings from its era to make itself felt in a non-conformist way. Great shot from the bus, Steven!

That red jacket really lights up this nice cityscape.

That is a very beautiful building with the glass skin. The clouds reflect nicely in it. Gorgeous capture.

SUperb viewpoint as well as reflection.

This is so beautiful! I have always loved your detailed mastery and blends...Awesome!

Brilliant capture of attractive and striking architecture again! I like the inclusion of the 'man in red'!

such beautiful composition, colors & reflections!
A M A Z I N G !!!!

Nicely shot. I like the look of the building to the right more that the glassed in box.

nice glass tower next to a more classic office complex

Chicago is such a pretty city

I think it's a harmonious architectural set.
The presence of the person in red, is an plus for the composition. The head that appears in the lower right corner is a minus.
;-)