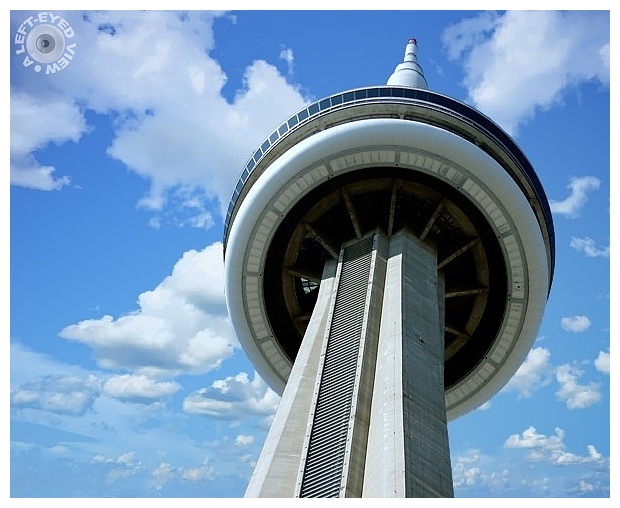 Posted by Steven (Chicagoland, United States) on 25 January 2018 in Architecture and Portfolio.

The CN Tower is a concrete communications and observation tower that rises 1,815.3 feet in downtown Toronto, Ontario, Canada. Built on the former Railway Lands, it was completed in 1976, and held the record for the world's tallest free-standing structure for 32 years from 1975–2007 and was the world's tallest tower until 2009 being overtaken by Burj Khalifa and Canton Tower, respectively. It is now the third tallest tower in the world and remains the tallest free-standing structure in the Western Hemisphere, a signature icon of Toronto's skyline.

Its name "CN" originally referred to Canadian National, the railway company that built the tower. Following the railway's decision to divest non-core freight railway assets prior to the company's privatization in 1995, it transferred the tower to the Canada Lands Company, a federal Crown corporation responsible for real estate development.

In 1995, the CN Tower was declared one of the modern Seven Wonders of the World by the American Society of Civil Engineers. It also belongs to the World Federation of Great Towers.

Cropping out most of the base, I believe, made the tower much more attractive from this "less revealing" point of view.

A great POV. I've been up there a number of times.

Very great PoV. Congrats (thanks for the info too)

another great capture of this iconic building

What an impressive tower, and what a clever and effective angle and perspective to show it.
I once saw a documentary about how it was built, and that was extremely interesting and inspiring.

I like the view point lookng up at this impressive tower. Nice detail and color.

It looks like a sleek spaceship ready to blastoff. Beautiful capture.

A spectacular point of view! I think that it is amazing that it was totally built from concrete. A fabulous image and great information.

A wonderful point of view.

interesting point of view. you make it seem like a rocket poised for a trip to Mars.

Terrific shot, Steven - I love the angle with the blue sky & fluffy clouds!!

Now that's an honor, Steven! And is that a revolving restaurant on top, I wonder???? I sure hope so. :)

An out of the ordinary POV that really makes this a unique shot. You usually have beautiful blue skies in your architectural images and this is another !

Angle and point of view very well chosen.
The presence of the clouds, is the cherry on top of the cake.

Such a beautiful structure....I would love to see it in person..Great image, Steven!

What a beautiful view of this great tower. Amazing details. Magnificent. :)

It looks slightly shorter without the base?!