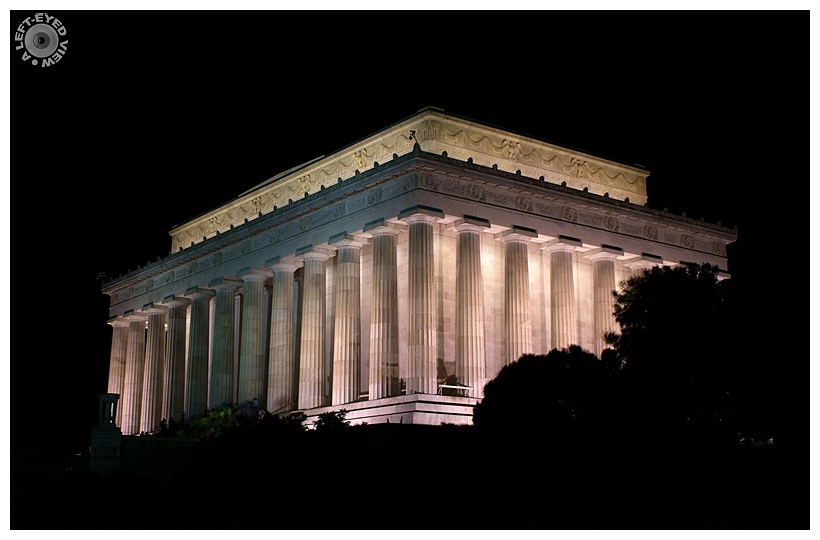 Posted by Steven (Chicagoland, United States) on 21 February 2018 in Architecture and Portfolio.

The Lincoln Memorial is an American national monument built to honor the 16th President of the United States, Abraham Lincoln. It is located on the western end of the National Mall in Washington, D.C., across from the Washington Monument. The architect was Henry Bacon; the designer of the primary statue – Abraham Lincoln, 1920 – was Daniel Chester French; the Lincoln statue was carved by the Piccirilli Brothers; and the painter of the interior murals was Jules Guerin. Dedicated in 1922, it is one of several monuments built to honor an American president. It has always been a major tourist attraction and since the 1930's has been a symbolic center focused on race relations.

The building is in the form of a Greek Doric temple and contains a large seated sculpture of Abraham Lincoln and inscriptions of two well-known speeches by Lincoln, "The Gettysburg Address" and his Second Inaugural Address. The memorial has been the site of many famous speeches, including Martin Luther King Jr.'s "I Have a Dream" speech, delivered on August 28, 1963, during the rally at the end of the March on Washington for Jobs and Freedom.

It has been listed on the National Register of Historic Places since October 15, 1966. It is open to the public 24 hours a day. In 2007, it was ranked seventh on the List of America's Favorite Architecture by the American Institute of Architects. Since 2010, approximately 6 million people visit the memorial annually.

the color is so soft

It's a "textbook" image, Steven, of which you can be proud!

Beautiful composition. The light is so right.

a brilliant image and wonderful narration !!!We had to study American History for our 10th grade !

The black surroundings makes the architectural beauty of this 'temple' stand out brilliantly!

The view brings out the commanding nature of this monument. Beautiful point of view.

A fine picture of the memorial and a notable comment on its history and importance.

Beautiful image of the memorial. Wonderful lighting and composition. And great information. :)

Perfect exposure and framing ! I love to see an important heritage building so well lit, too.

Very grand!
Looks like a posh version of the Acropolis in Athens.

A gorgeous night image. This is just spectacular! Wonderful point of view! Very informative. I really value the information.

That is beautifully shot.

This photo if it were in black and white would also work out very well.
Beautiful composition, well snug among the trees.

Nice series on the memorial. This night shot is particularly good