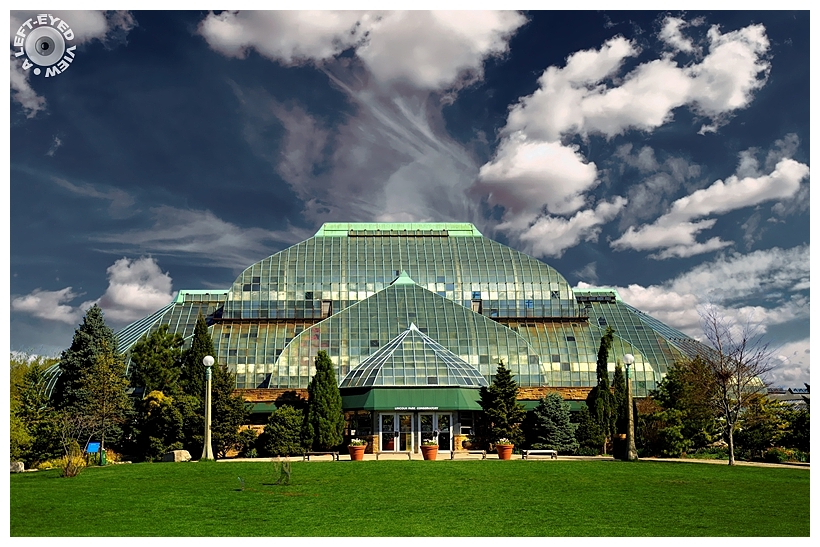 Posted by Steven (Chicagoland, United States) on 8 March 2018 in Architecture and Portfolio.

Sorry for my lack of comments yesterday. We ran into a family emergency yesterday. I hope to be posting once again on Monday.

This starts a series of photos taken at the Lincoln Park Conservatory recently. However, the drab winter season didn't provide an opportunity for a nice exterior shot of the conservatory. So this was a photo taken in April of 2012.

The Lincoln Park Conservatory was built in stages from 1890-1895. It consists of a vestibule, four display halls and fifteen propagating and growing houses. The vestibule and Palm House were built and opened to the public in 1892 and contain giant palms and rubber trees, including a 50-foot fiddle-leaf rubber tree planted in 1891. In the Palm House, one can also find Garden Figure, a sculpture by Frederick Hibbard. The Fern Room or Fernery, approximately five and a half feet below grade, was opened in 1895. It contains plants of the forest floor, primarily a vast collection of ferns. The Tropical Room was originally called the stove house. Opened in 1895, it contained an assortment of tropical plants suspended from bark-covered walls. It is now called the Orchid Room and has a collection of approximately 25,000 natural species. The Display House is used for seasonal flower exhibits.

wow, what a fantastic sky !

the structure is pretty, but that sky !

Perfect composition under a beautiful sky

An exceptional image for sure - definitely five-star !

A beautiful detailed frame with an especially fetching sky.

I hope that it's nothing serious and everything is resolved.
This is an excellent picture of this building. Thanks for the info too.

Another place on my list of things to see if ever come to Chicago again!
I like how you placed this impressive building and how you included the sky with its dramatic clouds.
All the best to you and the family!

wonderful capture of this beautiful building !!!And thanks for the write up:))))
The clouds and the sky make a terrific backdrop !

Nice combination of the architecture and the clouds !!

All components of the image are very pleasing, and that sky threatens to steal the show !

A fabulous picture of this conservatory. Excellent detail and especially rich colors.

Ohhhh! This is magnificient... Great shot!

What a beautiful view. Excellent composition and lovely architecture. Love this. :)

A gorgeous building and wonderful spring sky. It still looks great for a building so old.

A pretty sky that accentuates this grand conservatory.

Oh it's a wonderful and running ahir. Live it.
I hope that' your family will be fine.

Love it. Those clouds are amazing.

This is such a gorgeous building. I love the architecture. In this image, the clouds are just amazing! I look forward to this series. I cannot imagine a place having such a large variety of plants!

What a beautiful structure! And you've captured it with a lovely sky, light and composition - as you usually do.
I hope everything's ok with the family...

This is such a wonderful shot of this place.

She's a beauty, Steven, and would grace any brochure on the place! On a personal note, I hope everything is fine with you and your.

I love the very beautiful sky .

This green house is actually so much bigger than the ones we have in Kew Gardens!
I hope your family is doing alright.

Waaaauw...what a colors green and blue !

The sky is dazzling and the building has some resemblance to the petals of a flower. Maybe that was the architect's idea.