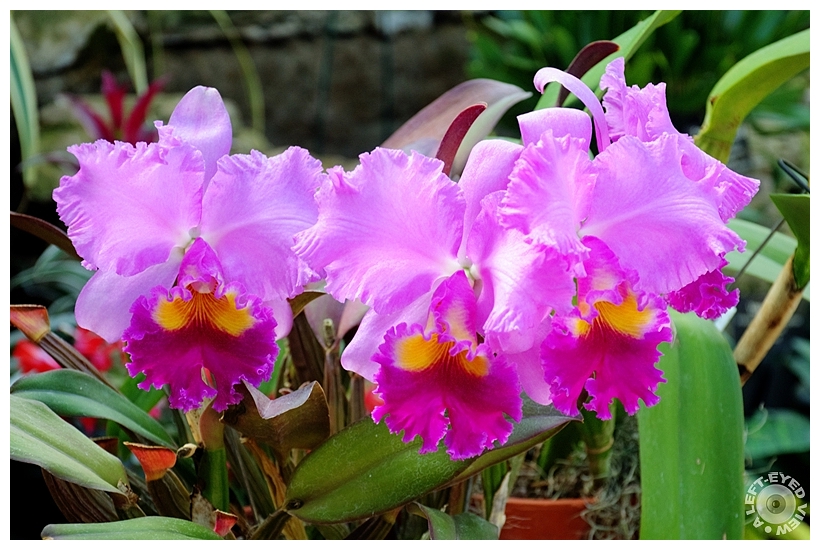 Posted by Steven (Chicagoland, United States) on 12 April 2018 in Plant & Nature and Portfolio.

Epiphytic or terrestrial orchids with cylindrical rhizome from which the fleshy noodle-like roots grow. Pseudobulbs can be conical, spindle-shaped or cylindrical; with upright growth; one or two leaves growing from the top of them. The leaves can be oblong, lanceolate or elliptical, somewhat fleshy, with smooth margin. The inflorescence is a terminal raceme with few or several flowers. Flowers have sepals and petals free from each other; the lip or labellum (lowermost petal), usually has a different coloration and shape from the rest of the flower and covers in part the flower column forming a tube. There are four polliniums (bag-like organs that contain pollen). The fruit is a capsule with many small seeds.

The genus was named in 1824 by John Lindley after horticulturalist William Cattley. Cattley obtained a specimen of then unnamed Cattleya labiata from William Swainson who had discovered the new plant in Pernambuco, Brazil, in 1817. The plant successfully bloomed under the care of Cattley and it became the type specimen from which Lindley described C. labiata.

They are magnificent. What beautiful pink

They are very beautiful.

This is stunning. The color is so vibrant.

Such beautiful and delicate looking blossoms. The color is wonderful.

A gorgeous orchid picture! Excellent detail and capture of the rich color.

Such a showy specimen!

They are so beautiful.

Absolutely beautiful! Among other orchids, my dad grew these in his greenhouse. When the cattleya bloomed the neighbors would always came over to admire it! This image brings back memories! Wonderful and very interesting information.

It's a gorgeous species - and now I know more about them! Thank you, Steven!

What a gorgeous image of these flowers, Steven. I'll never forget years and years ago when I first heard that there are over 20,000 species of orchids (let alone untold hybrids). It blows the mind!

Orchids are the most magnificent flowers. I'm always amazed about the number of varieties.

Oh... this is wonderful with her curly lilac skirts.

A gorgeous capture of this beautiful orchid.

Beautiful orchid. I have several of them in pots. But of this kind I have none.
The level of sharpness and the DOF are perfect.

Stunning beauties, nicely framed and lit for this sharing.

You know what? We usually use charcoal to grow orchids in Malaysia :)
Or simply tie them to a tree. They will grow just fine like that.

A gorgeous capture of these beautiful flowers. It doesn't get any better than this!