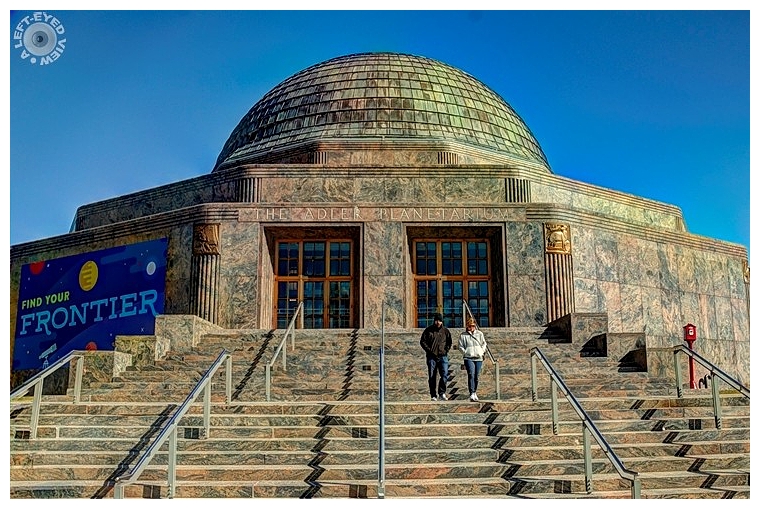 Posted by Steven (Chicagoland, United States) on 16 May 2018 in Architecture and Portfolio.

The Adler Planetarium & Astronomy Museum in Chicago, Illinois was the first planetarium built in the Western Hemisphere and is the oldest in existence today. The Adler was founded and built in 1930 by the philanthropist Max Adler, with the assistance of the first director of the planetarium, Philip Fox. Located on Northerly Island, it is a part of Chicago's Museum Campus along with the Shedd Aquarium and the Field Museum of Natural History. It was declared a National Historic Landmark in 1987.

The Adler has three full-size theaters. Since the museum's opening in 1930, visitors view representations of the night sky in the historic Sky Theater planetarium, the outer protective dome of which is visible from the exterior of the building. The Zeiss Planetarium projector is capable of accurately reproducing the movement of every aspect of the night sky. In 1999, the Adler expanded its exhibition space, including the addition of the definitiTM Theater, a completely digital fulldome video environment powered by DigitalSky 2 software. Outside the Planetarium are several sculptures, one by Henry Moore is a sundial sculpture named Man Enters the Cosmos, while the second is a Neoclassical sculpture of astronomer Nicholas Copernicus, a replica of a famous 19th century work in Warsaw's Royal Baths by Danish sculptor Bertel Thorvaldsen.

What a fantastic building and I love your wonderful text and image, Steven! I love that marble(?)... so beautiful !

Well, that sure looks built to last !

Lovely doc shot (marred only by the mangled language of the poster :) The cladding and the zig-zag shadows are great

I tip my hat to the preservation of a building like this, so wonderful to behold and adding to our human sense of curiosity and knowledge. Superb shot.

A fine picure of this famous place. A very interesting history.

An interesting place. Thanks for the info.

I love planetariums ! Oh to see this one again!

A beautiful image of this impressive building. A fascinating history.

Excellent symmetry and pov and overall compo. What an impressive history that goes with this building!

There's a tiny little dust spot on your sensor. ;p

I ike the detail in this one. Thanks for including the history.

This is a gorgeous building. The architecture is magnificent. Wonderful information. I would love to visit there.

What a magnificent buildling

an impressive structure and beautifully photographed

such beautiful composition, perspective, colors & lights!
A M A Z I N G !!!

Being the whole building covered with marble, it gives it a majestic appearance. It is a building that clearly marks the surrounding landscape.