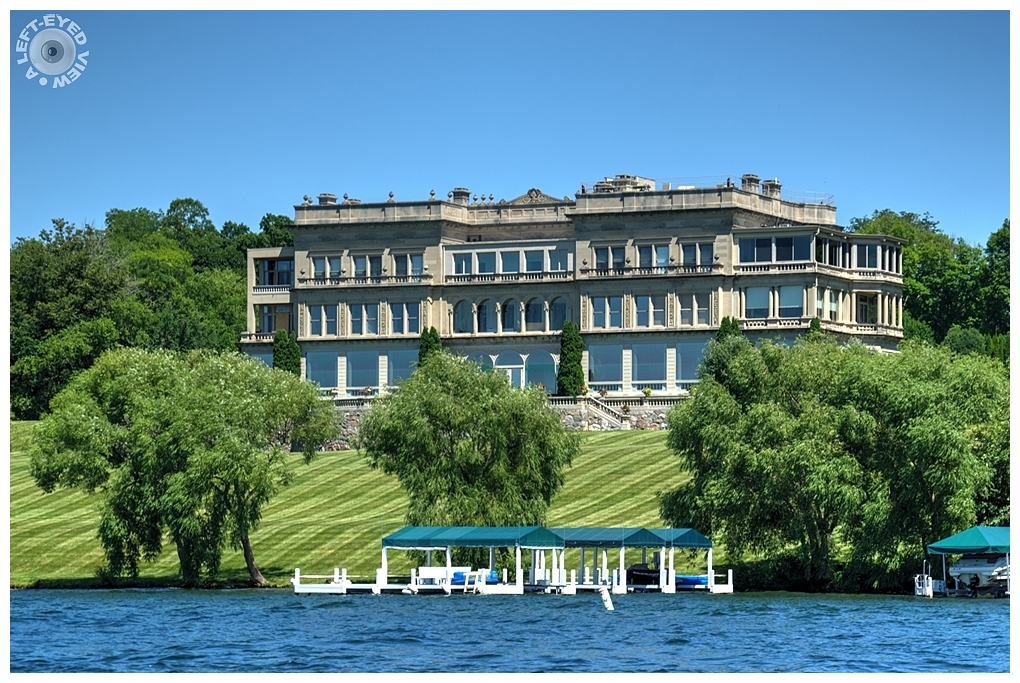 Posted by Steven (Chicagoland, United States) on 17 September 2018 in Architecture and Portfolio.

Stone Manor is the largest estate ever built on Geneva Lake and the most talked about. Otto Young started building this historic home in 1899, and originally called the mansion Younglands. Otto came from an affluent family in Germany. However, when he came to the USA in the mid 1800’s, he was virtually broke. He started his American business life selling costume jewelry from a pushcart on the sidewalks of New York City. Over the years, his business skills blossomed and he stockpiled an enormous fortune.

After the Chicago Fire of 1871, Mr. Young moved to Chicago and began investing heavily in real estate in the burned out city. Many thought that Chicago would never rebuild after the devastation of the fire, but Otto Young saw the opportunity. Much of the downtown Chicago real estate he bought is known today as the “Loop”. When he died in 1906, his fortune was estimated to be over $25 million.

The original construction plans for the home were much more humble and a $15,0000 budget was set. Like many dream home builders, Otto continued to make additions to the plans and by the time the home was completed and all of the ornate details were in place…the cost was close to $2 million. In total, there are seven levels in this historic estate, complete with 2 sub-basements, 4 main levels, and a sprawling roof terrace. A 250-foot wide veranda completes this architecture wonder that stretches an amazing 174 feet in the front.

The exterior walls feature Bedford limestone, while the interior walls are covered in Tennessee marble. Hand-laid parquet tile floors complete this majestic masterpiece. When completed in 1901, all of the doorknobs, plumbing and electrical fixtures on the main level were 14kt gold plated, with matching solid sterling silver on the second. Ceilings in the mansion are hand-carved out of mortar and lavishly decorated by imported European artists with breathtaking oil paintings.

The second and third levels were basically bedrooms and bedroom suites. The fourth floor was designed for recreation and even contained a gymnasium and a miniature golf course. Originally the roof was a garden, but there have been some changes throughout the years, including a rooftop swimming pool. Even the two level basement was elaborate including a three-lane bowling alley, jewelry vault, huge laundry and drying rooms and a monster coal storage room with a double boiler system. The lowest level was used for ice storage. In the winter they would harvest large blocks of ice from the lake and store them for summer use as a primitive air-conditioning system.

Otto Young only enjoyed the home for 5 years before his death, but the mansion remained in the family until 1939 when Young’s granddaughter presented the home and about 8 acres of surrounding land to the Episcopal Church to be used as a private school for girls. Unfortunately, the school failed financially after a few years and financial problems have followed ever since.

In the early 1960’s the mansion was taken over by Walworth County for back taxes. A tax auction was held and it was bought by a developer for just $75,000 in back taxes. Since then, several million dollars have been spent in the restoration of the building. In the 1970’s, the main level was transformed into an elegant French restaurant known as Stone Manor Inn. The restaurant experienced financial problems and was forced to close. Next came the Christmas Tree Museum. Most recently it was purchased by another Chicagoan and converted into 6 luxury condominiums.

Magnificent building and park. I like your interesting note also

Thanks for the wonderful story to go with the photo's beauty.
Your point of view is spectacular !~

A superb building in a beautiful location. Your information is really interesting about this house, 5*

You are an excellent tour guide/photographer, Steven. This is a handsome and literally rock solid structure on a very well maintained property.

Thank you for the detailed information. This image is beautifully composed and has such clarity.

Beautiful. I'm not sure I would invest in the building though.

This place has such an amazing history. It is hard just to imagine the size with 4 levels and 2 basements. It certainly went over budget but it sounded fabulous. I hope that the condominiums last after what seems to be so many business failures. A beautiful view!

An excellent image of this huge place that seems to have been plagued by large problems over the years.

WOW! That is something all right! What a character this guy was... the world needs people with guts like this!

Man, This is Beautiful!!!

I love the combination of blue and green... it's a fabulous photo of this beautiful building, and an interesting history to the house

A beautiful building in a lovely setting. And a very interesting history. :)